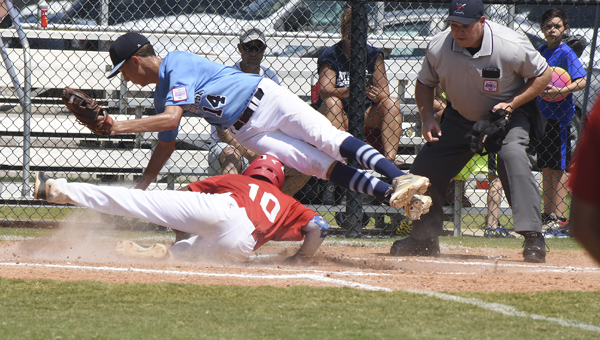 Selma’s Amarian Molette slides into home plate during the first game of Wednesday’s doubleheader against Enterprise in the Dixie Boys State Championship Tournament. Molette was called out on the play. Selma lost both games Wednesday and finished as the tournament’s runner-up.

The Selma Dixie Boys All-Star baseball team didn’t leave with the trophy it wanted Wednesday in Dothan, but it still left with an award to be proud of.

Needing only one win to secure the state championship, Selma’s 14-year-old team lost two games to Enterprise Wednesday, falling 12-3 and 18-8. Although the team had to settle for second place overall, it finished first in another category — sportsmanship.

The team was awarded the tournament’s sportsmanship award, which goes to the team that shows outstanding class, character and discipline throughout the tournament. D. Mark Mitchell, the state director for Alabama Dixie Boys Baseball, said Selma was unanimously chosen to win the award.

“They earned that,” Mitchell said, pointing out how well Selma handled the trophy presentation after losing to Enterprise. “That’s a very important award.”

Selma head coach Ricky Waters held the award in his hands in the dugout following the losses. He tried to use the loss as a life lesson and he pointed to the sportsmanship award as something to be proud of.

“That’s something to hold your head up about,” Waters said.

Selma interim recreation director Lebo Jones said he’d had people coming up throughout the tournament, talking about how classy the Selma players were.

“It shows you our kids are well-respected and when we leave town, we know how to represent Selma. That’s the main thing you look for in kids,” Jones said. “You want to win but the main thing is the kids act right and show good sportsmanship. That’s what it’s all about.”

Selma won its first four games of the tournament before losing twice Wednesday. Enterprise won the tournament last year and will once again represent Alabama in the Dixie Baseball World Series in Louisiana.