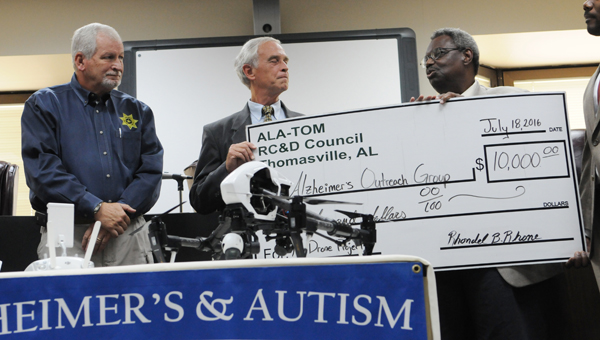 The Alzheimer’s Outreach Group LLC donated a drone to the Dallas County Sheriff’s Department on Monday to supplement the department’s Program Lifesaver.

AOG director Oscar Wayne Calloway said the end goal of the initiative, The Drone Project, is to supply drones to all of the metropolitan areas in Alabama to aide in the searches of wandering people with Alzheimer’s or autism. The next donation will be made in Montgomery.

“We were looking at keeping people safe,” Calloway said about the start of The Drone Project.

Program Lifesaver is an international nonprofit organization that provides tracking technology, such as tracking bracelets, to those with cogitative disorders, according to projectlifesaver.org.

Calloway said the drone will help fill in the gaps of the program by not only reducing the time of a search, but aiding in the search of a person who may not have a tracking device.

“The wristbands are good… but the thing is, a lot of people, they don’t even know they need one until they’re missing,” Calloway said. “That’s where the drones come in.”

The drone donated is a DJI Inspire and has been equipped with thermal imaging technology.

This will allow pilot officers to conduct searches at night, if needed.

Sheriff Harris Huffman, Jr., said the department’s response to the addition of the drone has been overwhelmingly positive.

Huffman said the drone will be primarily used for Program Lifesaver searches, but will be utilized in the event of a disaster or other missing person searches as needed.

Immediately following the drone presentation, the Alabama Association of Resource Conservation and Development (Ala-Tom RC&D) awarded AOG with a $10,000 reimbursement grant for The Drone Project.

This grant will help the AOG move toward the second phase of its drone project, upgrading, as well as getting drones for other areas.

Before the drone can be utilized, the department will have to have officers trained as drone pilots. Huffman said he hopes to have about five or six officers trained or at least one per shift rotation.