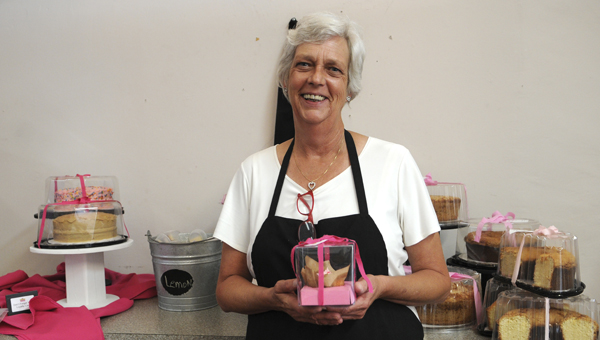 Mary Lee Riley has opened up The Pink Box Bakery on Broad Street. She makes cakes, cookies and pies, among other items. –Emily Enfinger

For Mary Lee Riley, it’s a little over an hour commute to Selma from Tunnel Springs, one-way, just to sell her baked goods. But it has been a longer drive getting to where she is now; owning a bakery, The Pink Box Bakery, on Broad Street in Selma.

“There’s a picture of the tunnel,” Riley said pointing to a photo in her bakery. It’s the infamous tunnel of her town, where she started her journey to now.

Three years ago, Riley closed her restaurant, Riley’s Ridge, in Tunnel Springs. The restaurant was a drive-up, serving burgers, homemade onion rings and other drive-thru foods.

The next three years she would explore her options working as a night cook at a convenience store, catering at hunting camps and selling Sunday lunches. Somewhere along the way, she began selling her foods at farmer’s and flea markets. Riley said it was then, at the markets, she realized baking is what she needed to focus on.

“I had women calling me for catering orders for big functions,” Riley said. “I quit doing everything except baking. I don’t do anything else but bake.”

From then, she catered for various events and traveled to different markets and functions to get her name out.

“Anywhere I could put my pink tent and table, that’s where I’d set up,” Riley said.

Riley said she has been to Brewton, Evergreen, Mobile, Foley, Camden, Montgomery and other areas throughout the state to sell her cakes. Of all the places she has been, she said she has seen the most success in Selma.

“Selma has welcomed me with open arms,” Riley said.

Earlier this year, The Pink Box Bakery made its first appearance as a pop-bakery on Water Avenue with a table, sign and a heaping variety of cake slices, samples, cookies and petit fours.

“I think they were just shocked that anyone would have the guts to just set up on the street,” Riley said about people’s first reactions. “The response was really pretty good.”

The bakery was open on Water Avenue three times a week until the weather got too hot, but selling cakes from the curb is how Riley got noticed. Not long after, she was asked to cater an event for the Chamber of Commerce. That night, she got four offers for real estate.

The Pink Box Bakery, located between Butler’s Jewelers and Carter’s Drugs, opened its doors to the public on Friday, July 8. The bakery sold out within a few hours of it opening.

For now, the bakery is open only on Fridays from 11 a.m. until 3 p.m. She said she has plans to include more hours in the future.

“Do I have plans to expand?” Riley said. “This is a stepping stone.”