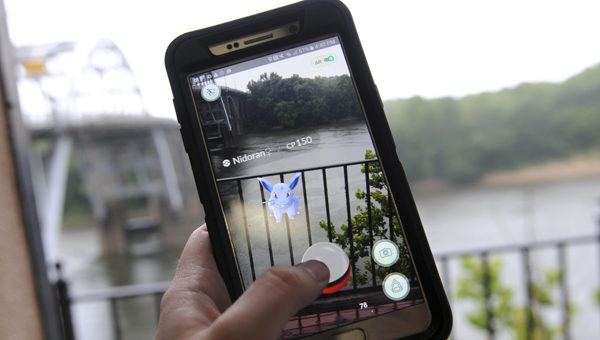 “Pokemon Go” was released earlier this month and has become a big hit locally and nationwide. Authorities are warning players of the augmented reality game to be aware of their surroundings and not to play while driving. –Emily Enfinger

Local authorities are warning players of the popular “Pokemon Go” game to be careful and to stay alert of their surroundings.

In the days since its release, the game has already become a huge hit in Selma and around the world. It topped the Google Play store and Apple Store within hours of its release.

The game was created by Niantic and allows players to catch Pokemon that appear to be in the real world. Pokemon can appear anywhere, whether that’s a living room, a park or a neighbor’s backyard.

“My biggest concern is that people be aware of their surroundings and not venture into a place if they have an uneasy feeling or don’t feel right about it in order just to chase something on a game,” said Lt. Sam Miller with the Selma Police Department.

The game has become popular in Selma for players of all ages. Players of the augmented reality game can be seen around Selma at Pokestops — which are usually historic buildings or markers — playing the game throughout the city.  Pokestops award players with Pokeballs, the item used to catch Pokemon, and other types of items that are useful in gameplay.

Some of the Pokestops in Selma include the Edmund Pettus Bridge, the Bridgetender’s House, Water Avenue near the St. James Hotel, the Bienville monument, the Selma Voting Rights Mural, Sturdivant Hall and the Selma Post Office. There are several others, just in Selma’s downtown district. The game puts players onto teams — yellow, red or blue — and allows them to battle to take over gyms, which like Pokestops are scattered around the map.

The game’s founders said their goal was to create a game that would entice players to exercise. The game gives players plenty of reasons to do so, including eggs, which hatch into Pokemon after a player has walked so far.  However, the game also requires players to stand in front of historic buildings or monuments, which could confuse people that live nearby.

Miller said it’s difficult to know if the department has received more trespassing or suspicious person calls since the game was released because they get so more reports about those two problems as it is.

“We get a lot of suspicious person calls all day every day anyways,” Miller said.

His advice is for players to be respectful and not to venture into areas they shouldn’t.

“If they’re out here exercising and out and about, I’m all for that,” Miller said. “Just be alert, be aware and be courteous and don’t venture onto somebody else’s property to a point where you can get in trouble and get shot at.”

AAA sent out a press release Friday urging “Pokemon Go” players not to play the game while driving a vehicle.

“Driving is among the most dangerous activities that people do on a daily basis, and the last thing we need is to increase the number of distractions in the vehicle,” said Clay Ingram, AAA Alabama spokesperson.

The National Highway Traffic Safety Administration estimates that at least 3,000 deaths per year involve a distracted driver. When driving 55 miles per hour, five seconds with eyes off the road is the equivalent to driving the length of a football field blindfolded.

“The game can wait,” Miller said. “You can always catch another Pokemon somewhere else but you can’t replace someone’s life because you are out here doing something you shouldn’t be doing while you’re driving.”

The Alabama Rural Electric Association also sent out a press release this week, warning players to stay away from  power lines, transformer and electrical work sites.

“The reality game is drawing players into some dangerous situations,” the press release said. “Electric utilities cannot control where the Pokémon appear, making it important for players to make sure they catch their Pokémon from a safe distance”