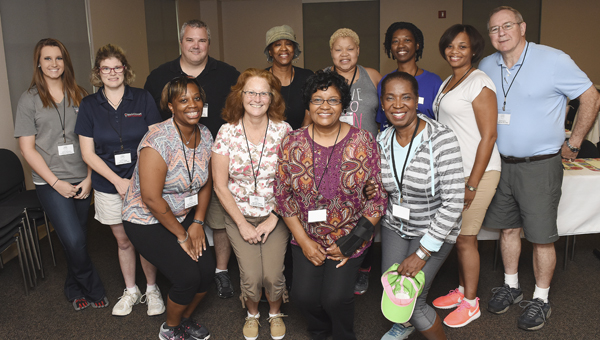 Selma-Dallas County Adult Leadership Class XXIII held its kickoff breakfast Friday morning at Vaughan Regional Medical Center. The class, which consists of 12 members, will spend the weekend at the 4-H Center in Columbiana on a retreat, where they will get to know one another better. The leadership program is an 11-month program where participants will meet once a month to learn more about Selma and Dallas County.

The classes will include trips to businesses around the county and includes the opportunity to see Selma and Dallas County from behind the scenes.

“They really want to be leaders in the county and they believe in themselves,” said the program’s director, Callie Nelson. “It takes that in order to be in this program, and they are willing to take the challenge.”

The class heard from Dr. Constance Smith Hendricks, from Concordia College Alabama, who served as the guest speaker. Hendricks, who recently graduated with Leadership Class XX, advised the next class to open their minds for the transformation they are about to go through.

“As you begin this journey today, I want you to open yourself up and allow that to take place,” Hendricks said of the transformation. “Some of you are going to be resistant to change and you will have blocked all you can from getting all you can out of this journey.”

Some of the members of the class were completely new to Selma, like Patricia Hannon, who moved to the city within the last year.

“I’m looking forward to meeting people, networking and being able to contribute to the health and well-being of the community, but I have to know the leaders,” Hannon said. “I’m all about engaging leaders and being a part of that myself.”

The class’ first assignment was to go through a questionnaire with their driving partner on the way to the 4-H Center. In most cases, the pairings were complete strangers when they first got in the car.

“I don’t know anybody but Mrs. Nelson and [leadership alumnus John] Solomon,” said Kimberly Bonner, another member of class XXIII, while looking around the room. “I’m a veteran of the military so I’m accustomed to meeting new people and being thrown in strange environments and coming out as a team, so I’m looking forward to it.”

During the breakfast, Nelson awarded Chet Chappelle of Class XXII with the Harriet Bates Award. The award is voted on by members of each class and is given to the participant they feel is most deserving.

“You are going to learn more stuff about your community, your city that you never knew existed,” Chappelle said. “This is a great program.”