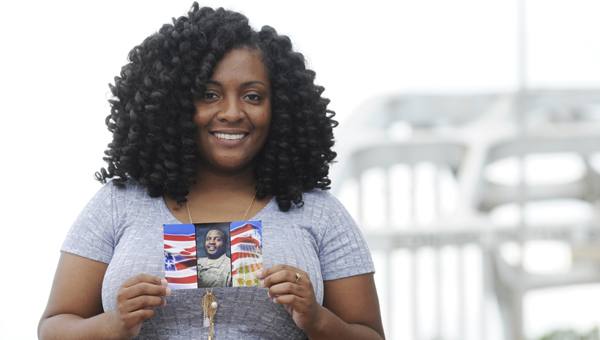 Jasmine Jones, 25, holds a photo of her brother, Sgt. Ricky “Mojoe” Jones, who was killed seven years ago in Afghanistan. –Emily Enfinger

For the past seven years, June 27 has been known as Sgt. Ricky D. Jones “Mojoe” Day in Dallas County. The day was named after Sgt. Ricky “Mojoe” Jones, a 26-year-old native of Plantersville, who was killed during a bombing while serving in Afghanistan in 2009.

“I was at work and he just kept saying he was tired and wanted to go to bed,” said Fredda Jones, Ricky’s wife who also served in the Army.

She said the troops were having a fallen comrade ceremony at the time of the bombing.

“As we were standing outside, we had an incoming attack,” Fredda said as she recalled three rockets coming in. “That’s when everything changed for me.”

Ricky died, on June 21, during the impact explosion of one of the rockets.

Nearly 2,000 people attended Ricky’s funeral service, Jasmine said. She recalled seeing people sitting on the floor and even standing in the outside parking lot because the space still couldn’t accommodate the crowd.

“For that amount of people to show up, means a lot,” Jasmine said. “He touched a lot of people’s lives.”

Anyone who knew Ricky would tell you he was the kind of person to give the shirt off his back if needed. He was happy, funny and a caring person who loved to tell stories.

“That’s what I try to remember about him instead of trying to cry about it,” Fredda said.

Ricky graduated from Dallas County High School in 2001. While there, he played running back on the football team. He earned a scholarship to a school in California, but decided to join the military and make it a career, Jasmine said.

Ricky and Fredda met through the army in 2003 and married in 2005. Ricky welcomed Fredda’s child from a previous relationship and together, Ricky and Fredda, had two children of their own.

Jasmine said Ricky’s old teachers and coaches organized the Mojoe Day dedication shortly after his death. She believes it is important to carry on Ricky’s legacy, especially for the sake of his children.

“We want to keep his legacy alive so they know how good of a person their father was,” Jasmine said.

Jasmine said the family generally has a small get-together for the dedication but has had some large events. She said next year, the family is planning a large cookout where veterans, Ricky’s friends, out of town family and former co-workers are invited.