Selma to play seven of 10 games at Memorial Stadium 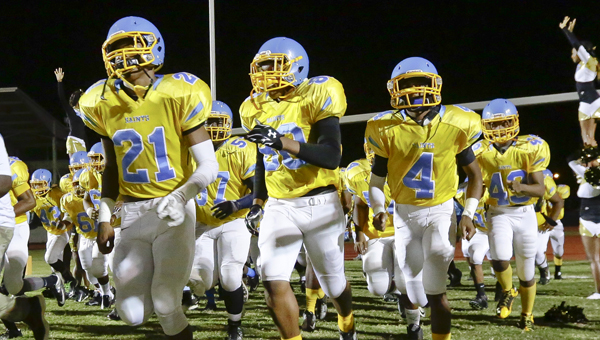 EDITOR’S NOTE: This is the fifth story in a series of football schedules previews for the seven teams from around Selma and Dallas County.

The Selma High School football team should get used to seeing Memorial Stadium because the Saints will be playing there a lot this year.

Seven of Selma’s 10 games this season are at the stadium, which hosts Saints’ home football games.

Although Selma won’t technically be the home team in all of them, the Saints will still be playing in front of their home crowd on their home field.

“We are expecting the city to come out in droves and [we want to] make it where people want to come out and watch us play football,” said Selma head coach Keon Handley. “We want to be what’s happening in Selma every week.”

Selma will play two of its first three games at home, but Selma will travel for only one game after Sept. 16 — a road contest at Brookwood on Oct. 7. It’s the type of schedule that can set up a team for success, but Handley knows a lot of problems can also arise from getting comfortable at home.

“It can also come back and bite you because you get comfortable playing at home and then you have to go on the road in the playoffs,” Handley said.

“That’s why I said it’s important we create the hostile environment every day at practice or even in the weight room, creating that element of competition and then when you leave the field brotherly love.”

Selma will open its season with its annual rivalry game with Southside at Memorial Stadium on Aug. 26. Handley is entering his first year on the job, but said he’s already heard a lot about the game.

“I’m chomping at the bit,” Handley said while smiling. “I’m looking forward to the game.”

The next week Selma will face one of its class 6A, region 4 rivals in Bessemer City on Sept. 2, which was the school where Handley first got the opportunity to be a high school coach.

“It’s going to be quite interesting. A couple of guys that mentored me, I’m probably going to have them as guests on our sideline that worked with me at Bessemer City and gave me an opportunity to coach,” Handley said.

The next week is another rivalry type game — Dallas County. Selma and Dallas County restarted their rivalry three years ago and will play this year on Sept. 9.

Selma has won every game in the series dating back to the 1920s, although the series has been off and on for decades. Selma won last season’s game 13-6.

The Saints will play their final road game of the year against Brookwood on Oct. 7. Selma defeated Brookwood 23-16 last season.

Selma will finish the season with three more home games.

Selma will finish its season on Thursday, Oct. 27 against Stanhope Elmore.

Handley said at this point the focus is on one day at a time. During the season, he said the Saints will shift their focus to being 1-0 each week.

“We’ve tried not to look too far ahead and overlook the things we need to do for our program right now,” Handley said.