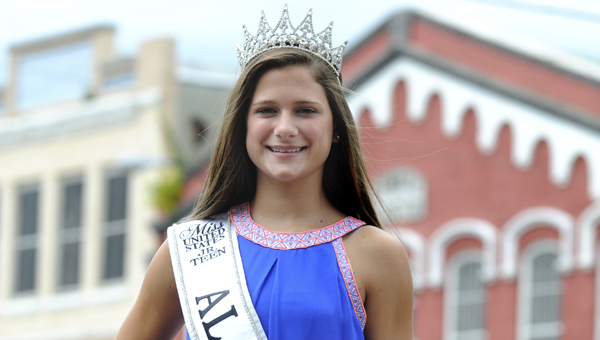 Selma’s Maggie Colley will represent Alabama on a national stage.

Colley was crowned Miss Junior Teen Alabama in May and will represent the state at the Miss Junior Teen United States Beauty Pageant at The Palms Hotel & Casino in Las Vegas from July 31 to Aug. 4.

Colley has been on a roll since she was 4-years-old competing in local pageants such as the Central Alabama Fair Pageant.

Although the Morgan Academy student loves competing in beauty pageants, she said it can be complex at times especially if you’re battling low self-esteem.

“It’s very scary going on stage to perform in front of other people and being judged, but you just have to believe that you’re beautiful and you must show everyone that,” Colley said.

Her mom, Rachel Colley, competed in pageants when she was in high school as well and passed the torch to her daughter. Rachel said she’s able to balance work and taking her daughter to rehearsals.

Her platform for the competition will be about anxiety awareness in youth and teens, and it’s called “Teal is for Real.” Teal is the awareness ribbon color for anxiety disorders.

Growing up, Colley struggled with anxiety and Attention-deficit Hyperactivity Disorder (ADHD), but she said her condition is not too severe.

She said she’s able to pay attention in school, but said she does get hyper at times.

To cope with her ADHD and anxiety, the honor student plays volleyball and softball and was recently being awarded best defensive player on the varsity team.

“Children feel that their parents won’t listen to them, but Maggie wants to teach them that you can tell them just like she did,” Rachel said.

For inspiration, the 14-year-old looks up to Pia Wurtzbach, who was crowned Miss Universe in 2015.

Colley wants people to know that there is more good being in pageants than bad.

“Most people think that pageant girls are little brats walking around with crowns on their head, but it’s different,” Colley said. “It’s about having your responsibility, having a good attitude, being able to work well with other people, and helping others. It’s a way for girls to blossom”

In her downtime, Colley likes to dance, which she’s done for 11 years. She also enjoys hanging with friends.

She hopes to attend Troy University to become a nurse practitioner once she graduates high school.