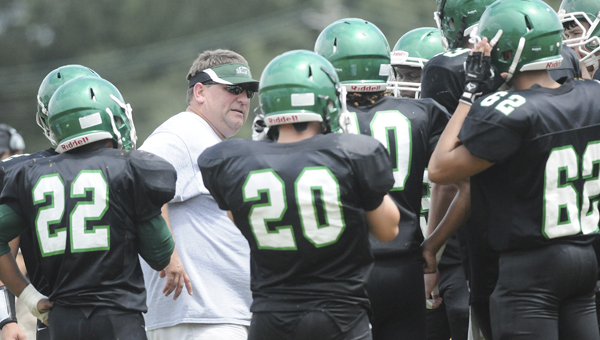 Dallas County head football coach Marty Smith talks to his team during a timeout in a game versus Selma last season at Memorial Stadium. The two schools will meet again this season on Sept. 9. Although the series has not been played many years, Dallas County has not defeated Selma in football since the 1920s. — File Photo

EDITOR’S NOTE: This is the fourth story in a series of football schedules previews for the seven teams from around Selma and Dallas County.

Football coaches always want to know where their team stacks up against other top teams from around the state. Dallas County head coach Marty Smith won’t have to wait very long to get his answer this year, as the Hornets open the year a brutal seven game stretch.

The Hornets will face McAdory, Calera, Selma, Maplesville and Demopolis all in the first seven weeks, and that’s not even including a jamboree against county rival Southside or a region game against Sumter Central.

The Hornets will play Southside on Aug. 19 in a jamboree at Memorial Stadium, but the regular season begins the next week. Dallas County will open its regular season Aug. 26 at McAdory, a team that went 10-2 last season. Smith said McAdory has five players on its team that have been offered Division I scholarships, including Auburn commitment Malcolm Askew, who is ranked in the ESPN300.

“It’s a good opportunity for us to make some noise for the teams in the Blackbelt to show that quality football is being played in our area and that recruiters need to get down in this area and look at our kids,” Smith said.

Dallas County will play its first home game the following week Sept. 2 against Calera. The Eagles went 7-4 last season and defeated Dallas County 31-7 in a key region game in October.

Following that game, the Hornets will play Selma at Memorial Stadium. It’ll be the third straight year the teams have played after the series took a break after 2007.

Selma won last year’s meeting 13-6 in a game that didn’t finish until Saturday due to inclement weather.

Following the Selma game, the Hornets play at Sumter Central on Sept. 16. Dallas County will then play Maplesville on Sept. 23, the first time the teams have played since 2005.

“They are a mega football power in any classification with all the success they’ve had in recent years,” Smith said.

It doesn’t get any easier the next week either. Dallas County plays at Demopolis on Sept. 30. Last year, Demopolis went undefeated in region play, including a 41-0 win over Dallas County.

Although those first six games will get a lot of the attention, the final four are important as well. Dallas County finishes with three straight region games and a non-region contest against Billingsley, another longtime rival that is returning to the schedule this year. Dallas County and Billingsley had met in jamborees in previous years.

The Hornets host Marbury on homecoming on Oct. 7, play at Jemison on Oct. 14, and at Central Tuscaloosa on Oct. 21.

All three of those games are region games that will likely decide the Hornets’ playoff fate.

Smith said Dallas County always breaks the season into thirds. He said teams make the biggest jump from week one to week two and from that point on he reevaluates every third week. He said that process wills help with this year’s difficult schedule.

“We look at the self scouting data after every three ballgames to see if we are developing any tendencies or doing anything we really need to look at that other teams are catching onto,” Smith said. “That’s how we break it down.”