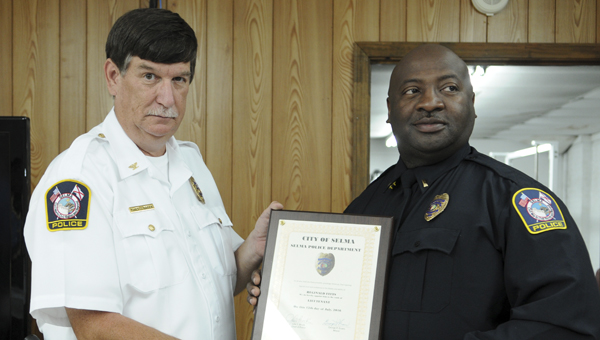 Lt. Reginald Fitts, Selma native and resident, was honored during a promotion ceremony at the department’s training room. A 15-year-veteran of Selma police, Fitts was promoted to lieutenant after serving as sergeant for six years. Now, he will be working as night shift commander.

“Senior staff here at the Selma Police Department is the backbone of the department,” said Police Chief John Brock. “He’s going to be an excellent shift commander. He’s got some good guys over there.”

Although he has been on the Selma force for a decade and a half, his first taste of law enforcement was as a military police officer beginning in 1987. He worked in the Army reserves for about 10 years before becoming a correctional officer at Dallas County Jail in 1999.

“It’s been a long journey,” Fitts said to the audience while reflecting on his first days with Selma police.

“My first training officer told me the day you stop learning in this job is the day you need to leave.”

Since working with Selma police, he has done everything from patrol to code enforcement, investigation division and more.

Fitts’ daughter, Sequoya Cox, presented him with his badge during the ceremony. She said his promotion was a proud moment for her.

“It makes me proud and gives me something to keep looking up to,” Cox said. “I love him very much and I hope his job makes him happy.”

Brock said choosing Fitts for a promotion wasn’t a hard decision to make.

“He has always been on our radar and never came off,” Brock said.

Fitts said he is thankful for the promotion and is looking forward to serving many more years with the department and protecting the city he grew from.

“I wanted to spend my whole career here and hopefully now I will,” Fitts said.

In June, three officers were promoted to lieutenant, three to sergeant and one to captain.

In a previous report, Brock said the June promotion ceremony was the beginning of multiple promotions.

He also said the department is looking to hire about seven new officers by the end of the summer.