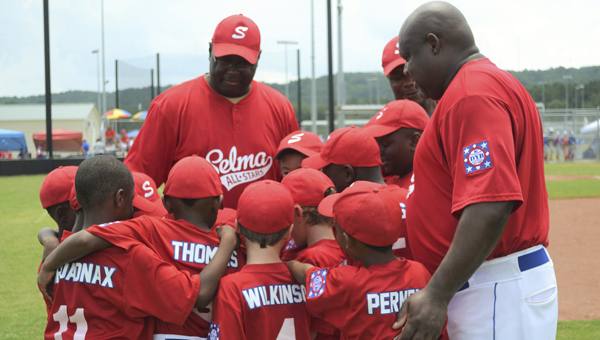 The Selma AA All-Stars reached the state semifinals in Wetumpka. The team lost to Taylorville 15-8 on Monday morning. –Submitted Photo

Selma’s 7-and 8-year-old all-star baseball team finished the season a couple of wins away from claiming the city’s first youth state baseball championship since the 1980s.

The Selma AA team (10-2) lost to Taylorville 15-8 in the semifinals Monday and saw its season come to an end.

“They know how big it was and how far they came,” said coach Quinn Pernell. “I like it because it brought 7-and 8-year-olds closer together.”

The Selma team lost its first game of the 23 team tournament to Southeast Blue, but rebounded to win games against Enterprise, Green Hill and Municipal America to climb through the loser’s bracket.

With a place in the championship on the line, the team came up short against Taylorville.

Pernell said a similar scenario played out Monday when Selma made mistakes in the field and struggled to hit the ball.

The loss ended an incredible run by the Selma All-Stars, who nearly made it completely through the loser’s bracket.

“We weren’t expecting to lose that first game but it made us come closer together and play even harder as a team,” Pernell said.

The rest of Selma’s All-Star teams will begin play later this week in state tournaments, including the Dixie Majors, which will host the tournament at Bloch Park.