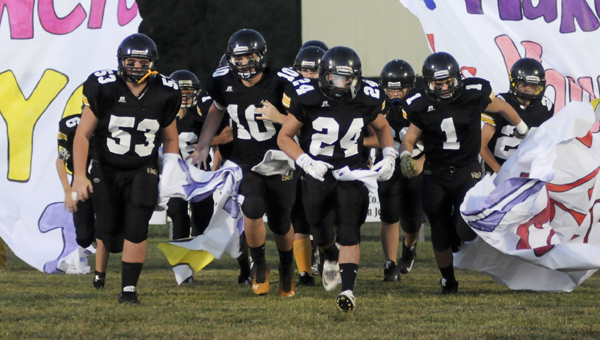 Meadowview Christian takes the field for its game against Victory-Millbrook last season. The Trojans went on to play in a state semifinal game, which was won by Victory. Meadowview and Victory will play again this season on Sept. 30. –File Photo

After two years in transition, Meadowview will again play 6-man football in 2016, meaning the Trojans will see some familiar teams this year.  Rather than new teams, the challenge this year will be a grueling road stretch that will prevent Meadowview from playing a home game for almost two months.

Meadowview opens with a home game against defending state champion Cullman Aug. 19 but then won’t play at home again until Oct. 7.

“We got a tough draw this year on our schedule but that’s just part of it,” said Meadowview Christian head coach Lebo Jones.

On top of that,  the Trojans are scheduled to open the season with two of the four-playoff teams from the Christian Football Association from last season — Cullman and Clay County Christian. Cullman Christian was Meadowview’s first 6-man game in school history last season and it showed.

Cullman won that game 80-6 and went on to finish the year as undefeated state champions.

The game against Clay on Aug. 26 will also be a rematch. Meadowview won last year’s contest 32-21.

“It’ll be a test early in our first two games,” Jones said.

After a bye week, Meadowview will play at Chilton Christian on Sept. 9. The teams have not played before.

On Sept. 16, Meadowview will play at New Life Christian in an 8-man football game.

Although the schools didn’t play in football last season, they did play two seasons ago when Meadowview was playing 8-man.

Jones said the game won’t count toward the 6-man standings, but prevents Meadowview from having two bye weeks and helps the Trojans get used to 8-man football again.

Meadowview is likely to play 8-man or even 11-man football next season, Jones said.

“I feel positive that next year we will be back in 8-man and possibly even 11-man,” Jones said.

After the Cahawba game on Sept. 23, Meadowview and Victory will battle Sept. 30 in a rematch of last season’s state semifinals.

“They have had a good team for the last four or five years and that’s a team we know will be good every year and that we’d like to beat because they put us out of the playoffs last year,” Jones said.

Meadowview finally plays another home game on Oct. 7, seven weeks after opening the season versus Cullman.

The Trojans will play Emerald Mountain on Oct. 7, in another game that could get changed, Jones said.

If it does, Meadowview could play Victory-Columbus there, if the game with Cullman remains on the schedule.

Meadowview will finish its season with two more home games on Oct. 14 and Oct. 21 against Brooklane Baptist and Marion. Meadowview defeated Brooklane 60-19 and Marion 40-12 last season.