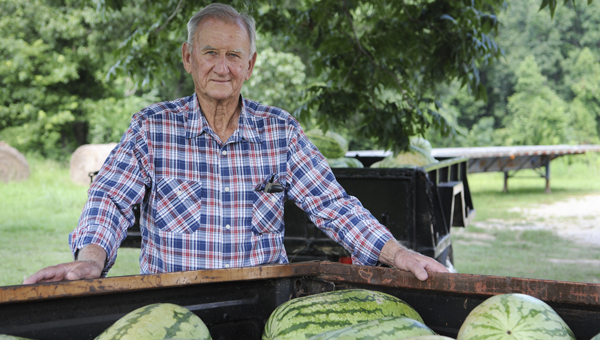 Ronnie Adams, 79, poses for photos with his watermelons. –Emily Enfinger

Ronnie Adams, 79, laughed when he reflected on mailing a 38-pound watermelon to a friend in Ohio. The melon cost $68 dollars to ship and was expected to reach its destination Thursday afternoon.

Farming watermelons is a hobby for Adams that began almost 15 years ago after retiring from the timber business.

“I was happy that he had something to do because he’s not one to sit in the house,” said Sara, Ronnie’s wife of 58 years. “He’s got to be busy doing something. He’s like the Energizer bunny.”

The hobby started off with three acres of land. Now, Ronnie owns about 10-15 acres of watermelon patches throughout the area. Ronnie knew from the start that growing watermelons wasn’t going to be a small affair.

“When you plant them with a planter, it’s not that big of a deal. I can do all of that in about two days when it comes to planting,” Ronnie said. “But it takes me about a week or so to prepare the ground to plant the melons [in the fields.]”

Over the years, Ronnie has experimented with growing different types of watermelons including Carolina Cross, Summer Flavor 710 and 720.

His favorite is Summer Flavor 710 watermelons. He said they are more consistent in size and have richer colors compared to others.

“Everybody says they’re so sweet. I don’t know what he does to make them so sweet. Other people plant the same kind, but they don’t get the same reaction,” Sara said. “I guess it’s his magic touch.”

“Once we pull a load and bring them here, trucks just appear,” Sara said. “I don’t know how they know, but they do.”

Ronnie said during the season, people begin calling as early as 5 a.m. and begin showing up around 6 a.m. He said Thursday morning he sold roughly 200 watermelons before 8 a.m.

The watermelons are sold $5 per melon, regardless of size.

His watermelons have been sold at different stands and markets throughout town, but can be purchased at his property at the end of County Road 939.

For the future, Ronnie doesn’t plan on expanding his crops much more. Already, the crops yield between four and five thousand every year; plenty to keep Ronnie and his family busy during the season.

He said farming has been a good pastime to spend with his children and grandchildren.

“They love it,” Ronnie said. “We have melon every night here.”