Body of man who jumped off bridge recovered in Alabama River 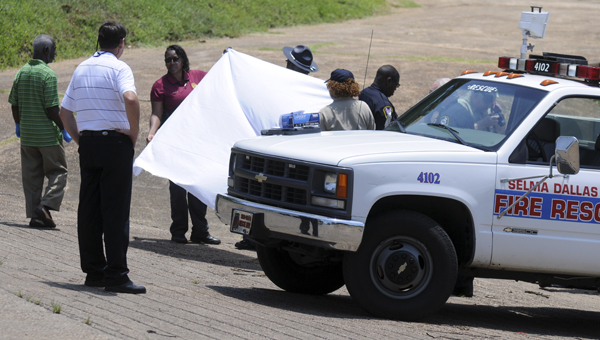 The body of a 32-year-old Selma man was recovered in the Alabama River on Sunday. –Emily Enfinger

The body of a 32-year-old Selma man that jumped off the Edmund Pettus Bridge Saturday morning was retrieved Sunday in the Alabama River.

The man has been identified as Andre Heard, according to Selma Police Chief John Brock.

“This morning around 11:09 a.m., the Calera Dive Team was going out to prepare the search and saw the body about 10-12 feet off the bank near Lauderdale,” Brock said on Sunday.

The cause of death is also still unknown.

“It hasn’t been determined 100 percent officially yet because we’re going to do an examination on the body,” said Dallas County coroner Alan Dailey Sunday at the marina. “But as it looks now, it will probably be listed as a drowning.”

The Selma Police Department responded to a call Saturday of a possible jumper at 5:30 a.m. on the bridge. An officer getting off duty was near the area when the call came in. He responded to the call and thought he saw a man jump.

“We were in the middle of a shift change when the call came in and he was close to the bridge so he went that way,” said Selma police Lt. Joe Bills on Saturday. “[The] officer thought he saw someone on the bridge, and then he didn’t see him.”

The Selma Police Department and Selma Fire Department searched the area but did not find anyone.

“We couldn’t do this without them,” Brock said of all the units that aided in the search. “We don’t have a water police type dive team, so we had to rely on other people and other organizations. Every time we’ve called, these same group of guys come together and help us out.”

Divers began searching the river around 2 p.m. Saturday and searched until daylight began to fade at around 7 p.m.

The team was prepping to do sonar readings of the area Sunday morning when they discovered Heard’s body.

“I’m just glad that we were able to hopefully help the family have some closure with the recovery of the victim,” Calera Police Deputy Chief and dive Commander Clint Barnett said.

“I’m sorry it turned out this way, but at least with this outcome, hopefully they will be able to have some closure and peace.”