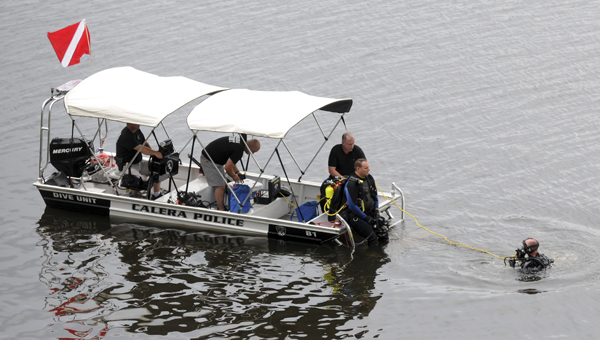 Divers with the Calera Dive Team have been called in to help look for a person that might’ve jumped off the Edmund Pettus Bridge Saturday morning.–Emily Enfinger

The Selma Police Department and regional dive and rescue teams spent Saturday searching for a person they believe might’ve jumped off the Edmund Pettus Bridge.

The police department responded to a call Saturday of a possible jumper at 5:30 a.m. on the bridge. The Selma police and fire departments searched the area, but did not find anything.

The Alabama State Marine Police, Calera dive unit and Autauga County Rescue Squad were brought in to aid in the search around 2 p.m. and searched until 7 p.m., when sunlight began to fade. They’ll resume searching again on Sunday morning, according to Selma Police Chief John Brock.

“We are taking no chances,” Brock said.

Investigators believe the alleged jumper is a male, but they didn’t have any other information.

“If we’ve got someone who’s saying they believe someone went over [the railing], we will bring in the rescue squad and start trying to find someone,” said Selma police Lt. Joe Bills.

Bills said the responding officer was just getting off duty when the dispatch call came through.

“We were in the middle of a shift change when the call came in and he was close to the bridge so he went that way,” Bills said. “[The] officer thought he saw someone on the bridge, and then he didn’t see him. That’s all that we are working on right now — the assumption that someone jumped.”

Calera Police Deputy Chief and dive Commander Clint Barnett said the search began based off witness statements of where the jumper was last seen and expanded from there. Bills said anyone with information regarding the potential jumper should contact Selma police.

Last month, a Selma police officer prevented a woman from jumping off the bridge.

Officer Michael Kiser was responding to a call in Selmont when he noticed a woman dressed in only her underwear overlooking the railing, according to a previous report. After observing the situation for a few moments, the officer took action when he saw the woman climb over the railing and was able to pull her back over to safety.