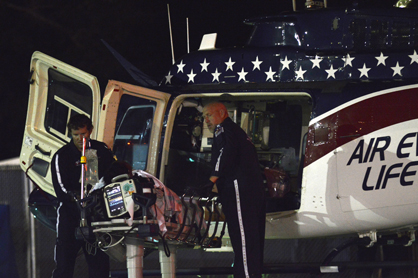 The Alabama State Bureau of Investigations has taken over the investigation of an officer involved shooting Thursday night that left a man dead, and a female and Selma police officer injured.

Around 11:30 p.m. Thursday, Selma Police Department officers responded to a call of a domestic violence shooting in the 700 block of King Street. Radio dispatch informed officers that a family member said the suspect had shot their mother.  The suspect has been identified as 62-year-old Earnest “Scoop” Fells, according to District Attorney Michael Jackson.

The Selma Police Department has not released any information on who called to report the shooting.

Selma Police Chief John Brock said upon arriving, responding officers attempted to enter the house after hearing gunfire coming from inside the residence. Fells shot at the officers, injuring one. Brock said the officers returned fire, striking the suspect and killing him.

The injured officer was treated for non-life threatening injuries at the hospital’s emergency room. Brock said the officer was grazed on the nose during the shooting.

A female victim at the residence, who has also not been identified by authorities, was transported to the Vaughan Regional Medical Center emergency room where she was stabilized before being transported by helicopter to Baptist South in Montgomery.

Brock said the name of the officer who shot Fells would not be released at this time, but he did say the officer has been with the department for less than two years.

“The officer, as protocol with our department, has been placed on administrative leave with pay pending the outcome of the investigation,” Brock said.

Brock said it is not known how many times Fells was shot by the officer or what kind of gun he was using. Brock said four officers were at the scene at the time of the shooting but he is unsure how many returned fire.

Brock said officers have been called to the home “numerous times” before in response to reports of domestic violence.

Brock said the officers were wearing body cameras at the time of the shooting.

“The body cams were downloaded. SBI took control of all of that,” Brock said. “I don’t know if they got (recorded) dispatch calls yet. I know they are working on it as part of their investigation.”