Interns from around the country spending summer working in Selma 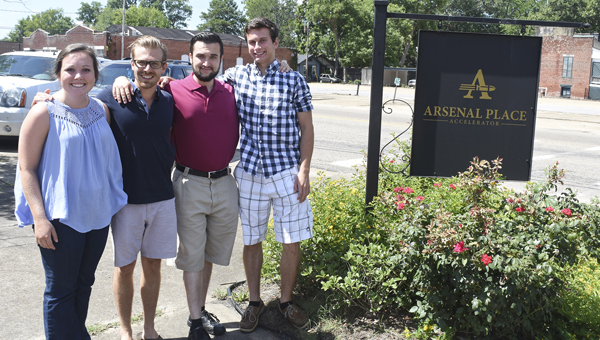 Taylor Davis, CJ Hock, Zach Moehring and Alec Rhodes are four of 13 students that have been interning at Arsenal Place Accelerator this summer. –Daniel Evans

More than a dozen interns at Arsenal Place Accelerator and Hope Academy are making their mark on Selma this summer.

The accelerator and the Dallas County Children’s Policy Council have partnered for the internship, which includes 13 total students from all over the country. Several are students at Asbury Theological Seminary in Wilmore, Kentucky, three are from Pennsylvania, one is from Washington D.C. and six are from the Selma and Montgomery area.

The government and social welfare interns work with the children’s policy council, while the business oriented interns are spending their summer with Arsenal Place.

Both sets of interns have had a busy month.

The students have worked with Blue Jean Selma, the United Way of Selma-Dallas County, Hope Academy and many other community organizations.

“We’ve taught a lot hopefully, but we’ve also learned a lot from interns, like what can we do different that will attract or help the younger generation or even the folks we are working with on a daily basis,” said Dane Shaw, who serves as the president of the board at Arsenal Place. “Maybe there’s something we’re not seeing.”

Zach Moehring, a student at Asbury, has created a business plan for a pontoon boat business and worked with Brown Chapel AME Church. Taylor Davis, an Asbury student from Clanton, spends Tuesdays working with the Central Alabama Regional Child Advocacy Center and has been updating a website describing the internship.

“I’ve been working on a more thorough and direct explanation of what’s going on so we can put it on the website so we can display in a way that will really draw people in,” Davis said.

Alec Rhodes, an undergraduate student from American University in Washington D.C. has spent the summer creating a promotional video for future internships, which has included flying a drone over parts of Selma.

“It’s only going to be about a minute or two, but I’m doing as much as I can to influence others to come down here and help Selma,” Rhodes said.

He’s also been assisting the United Way of Selma-Dallas County with logging some of its paperwork into a spreadsheet.

He said he’s already learned from the internship that starting any movement or business in the world is all about the relationships formed.

“I think so often we try to make our measurements and keys for success in numbers we crunch out over these two months but the reality is we have a lifetime where we are going to be investing in relationships with people here,” Hock said. “I think the big takeaway from the summer for me is seeing the importance of sharing human experiences.”

The students said the faith based side of the internship is part of what appealed them to the Selma area.

Many grew up in cities and towns the size of Selma, with some of the same problems as Selma.

“I think there is something happening in the heart of Selma that is really is for the heart of America,” Hock said.

“It’s really neat to be a part of it for the season.”