Appraisal details what St. James could be 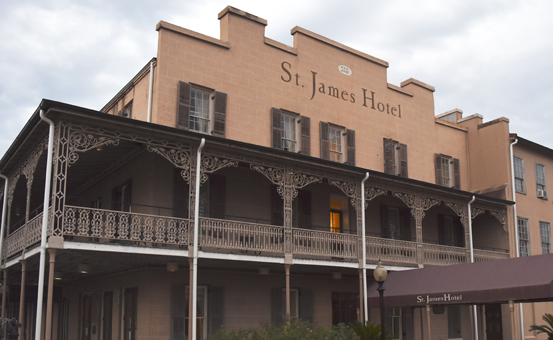 An appraisal from Hotel Appraisers and Advisors details renovations needed at the St. James Hotel to make the property a flagship hotel.

The appraisal of the St. James Hotel discussed repairs the building needs and mapped out what the future of the hotel could look like, if more than $6 million in renovations are completed.

The appraisal was completed in April by Hotel Appraisers and Advisors and put the hotel’s value at $900,000. The two-story Dallas Seed building, located at 1224 Water Avenue, was also included in the appraisal and factors into that number.

“Although the St. James Hotel is currently open as a hotel, functional obsolescence, the absence of a national reservation system and the need for professional hotel management currently prevent the property from achieving its highest and best use,” the appraisal read.

Several problem areas were documented. Five guestrooms are not operational due to roof leaks, water damage or mold problems; the gutters are improperly installed in several areas and water damage was visible in some of the guestrooms and along the exterior of some of the walls; wood rot was visible around guestroom windows and some windows may also require replacement; the west-side porch is in violation of local codes; the HVAC system needs to be revamped; the boiler room floor does not drain properly; and plumbing in some of the guestrooms needs to be replaced or repaired.

“The cooling system appeared to be a patchwork of individual air-conditioning units connected to various guestrooms. This does not appear to be an efficient heating and cooling solution and represents functional obsolescence,” the appraisal read. “Some guestrooms did not have properly functioning air conditioning.”

Most of the $6 million in renovations costs would go toward these repairs, which would be around $1 million, and the cost of expansion, which is more than $2.5 million.

“To achieve its highest and best use, we conclude that a buyer would need to acquire the St. James Hotel and the Dallas Seed Building together, implement a major expansion and renovations, acquire national branding and retain an experienced hotel management company to operate the expanded facility,” the appraisal said.

The appraisal maps out what a renovated hotel would look like. On the first floor of the main building a dedicated breakfast area would be added. On the second floor one guestroom would be demolished to create a passage to the Dallas Seed Building, reducing the room count to 41 in the main building.

The appraisal assumes that the entire first floor of the Dallas Seed Building, which is approximately 10,000 square feet, would be leased out for uses such as a restaurant, retail store or a banquet hall. On the second floor of the Dallas Seed building, an additional 27 guestrooms would be added, plus an exercise room, bathrooms and vending areas in the middle of the floor.

The hotel currently has 41 guestrooms, but under the recommended expansion and renovations, that number would expand to 68. After the recommended renovations, the hotel would have 3,000 square feet of meeting space, a business center, breakfast area, complimentary hot breakfast, exercise room and 14,000 square feet of leasable retail and restaurant space.

The appraisal assumes that the St. James would become an upper-mid-class chain hotel, associated with a national brand. The appraisal even discusses possible national chains, such as the Wyndham Garden, Choice’s Ascend Collection and the Holiday Inn brand.