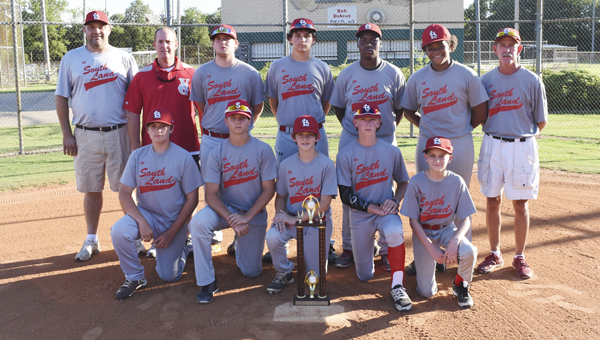 It’s been several weeks since Southland defeated The Place by 10 runs to cap an undefeated regular season, but Thursday was the first time the team had seen its championship trophy.

After winning that game, Southland was supposed to play two more games, but both of those were cancelled, meaning there was no formal trophy presentation. Southland, and other teams in the 13 and 14-year-old age group, didn’t play a regular season ending tournament, due to rainouts that forced the schedule to be adjusted.

“We were looking for a 12-0 [season] but 9-0 is still pretty good,” joked Southland head coach Darren McGilberry.

The team gathered for the first time to take photos and celebrate its honor Thursday night at the Complex. If the schedule lines up in the future, McGilberry hopes to have a pool party, or some other kind of celebration.

What Southland accomplished this year is worthy of a party or two.

The team won seven of its nine games handily this year. Southland came from behind to defeat Turner Chevrolet in the final inning and defeated State Farm 11-6 in another game, but McGilberry said that one was much closer than the final score indicated.

Outside of those two, most of the other games were decided early.

“We figured we would be one of the better teams, but we didn’t think we’d go undefeated,” said Joseph Estes, who played shortstop and pitcher on the team. “After the first kind of games, we decided to make it a goal. We achieved it.”

McGilberry said he credits the success to having so many players that were willing to play any position.

Jeremy Lee, who played catcher, pitcher, shortstop and third base, said every player on the Southland team got to play.

“Normally, the first nine get to play — the starting lineup,” Lee said. “On this team, we got to sub people in and even our subs would still be good. Even when we had our subs in we were still winning.”

Many of the players on the Southland team are playing on Selma All-Star teams now that are chasing state championships.

Both teams have qualified for state tournaments.