Johnson to host annual Fun Fest in Selma on July 9 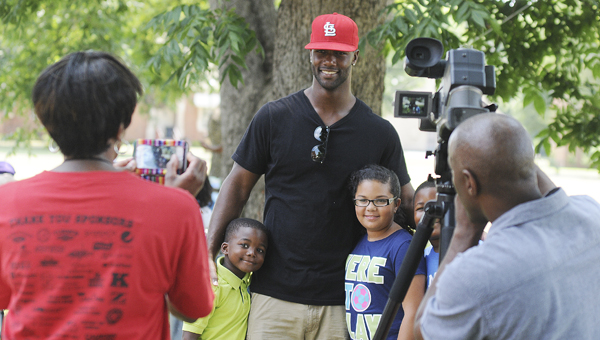 Michael Johnson poses with children for pictures at his FunFest two years ago in Selma. –File Photo

Michael Johnson is going to be back one last time before starting another season in the NFL, and once again, he’s making his last stop of the summer in his hometown of Selma to give kids a chance to be active and have fun.

Johnson, a defensive end for the Cincinnati Bengals, will host his fifth annual Fun Fest Saturday, July 9 at Wallace Community College Selma from 10 a.m.-2 p.m. The admission to the event is one non-perishable food item to donate to the Selma Food Bank.

The fun and games will include kickball, Zumba, a water slide, bingo sack racing and face painting.

“We’ll do as many games as we can think of. Just something to keep them active,” said Thomasene Johnson, Michael’s mother.

There will be hamburgers and hot dogs, and Kona Ice will also be there to provide refreshments for those who attend.

Last year, the heat played a role in the Fun Fest. Thomasene said if it’s too hot this year, Wallace’s gym will be used for most of the activities.

Each year, Michael takes time right before he heads to training camp to plan this event. Thomasene said Michael looks forward to the Fun Fest because he loves children.

“He really likes hanging out with the kids,” Thomasene said. “

He likes playing with them and he likes being at their level.”

Sarrell Dental Center will help sponsor the event and set up a photo booth to take free pictures with Michael.

While Michael will have a busy schedule after the Fun Fest is over, Thomasene said he will make the most of the time with the kids while he’s there, which includes taking pictures with kids and signing autographs.

“I’m sure he will do that,” Thomasene said. “He doesn’t have a problem taking time for that.”

The Cincinnati Bengals’ training camp begins July 29. The first preseason game is Aug. 12 at home against the Minnesota Vikings.