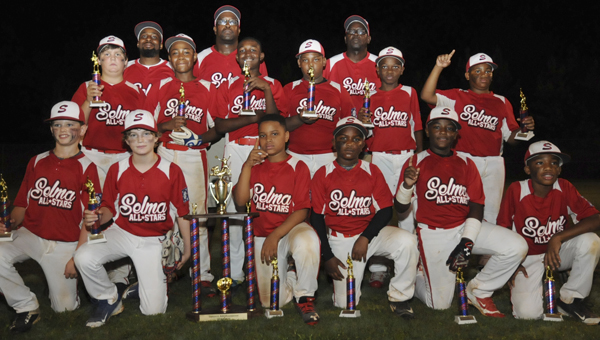 Selma’s 9-and 10-year-old All-Star baseball team won the second game of a doubleheader against Thomasville 24-7 Wednesday night at the Sportsplex to advance to the state tournament in Enterprise, which will take place July 15-20. — Justin Fedich

The AAA 9-and 10-year-old All-Star game between Selma and Thomasville lasted past 10 p.m. at the Sportsplex Wednesday night, and there was only one team prepared to handle the late night with the same amount of energy it started with.

Selma won the second game of a doubleheader against Thomasville 24-7 after losing the first game 8-5. The Selma All-Stars only needed to win one game to advance to the state tournament in Enterprise, and they used a late surge in the final game to accomplish just that.

Trailing 6-2 at the top of the third inning, Selma had three innings to make up four runs. It took no time at all, as a seven-run third inning and a 15-run fourth inning ended the game in mercy rule.

“They ran out of pitchers, so that helped out,” said Selma head coach Jason Rogers. “Our bats came alive.”

In the first game, however, it was Thomasville who came from behind to win. In the top of the fourth inning, Selma scored three runs to grab a 5-3 lead. Jordan Lamar hit home Jamarion Acoff, and Lamar scored after Moss Jones’ steal to second base caused a distraction.

In the bottom of the fifth inning, Thomasville’s K.J. Shamburger hit a two-run double to give his team a 6-5 lead. Eli Price hit an RBI to give Thomasville another run, and Selma couldn’t make up the difference in the top of the sixth inning.

The second game started out equally as close.

Thomasville opened a big lead in the bottom of the second inning, when Selma fielding errors allowed its opponent to take a 6-2 advantage.

In the top of the third inning, Selma took back control. Quinderius Chambers drove home Rogers Jr., Joshua Palmer escaped a pickle to score and DeAndre Chestnut hit Chambers home. Lamar added an RBI single to give Selma a 9-6 lead.

Palmer limited Thomasville to one run in the bottom of the third inning.

Selma added 15 runs in the top of the fourth inning, as Thomasville cycled through pitchers.

Palmer closed the game at the mound in three batters in the bottom of the fourth inning to end the game.

“Half of these boys have been playing with me since they were 5 or 6 years old,” Rogers said. “It’s our destiny.”