Police want people to have safe Fourth of July weekend 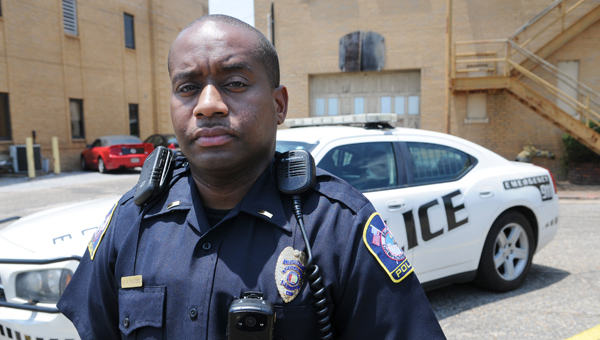 Lt. Kenta Fulford, a patrol unit shift commander, poses for a photo Wednesday. More patrol officers will be working during the Fourth of July holiday weekend to ensure everyone’s safety.

According to a Selma ordinance, it is unlawful to sell or shoot fireworks within the city limits.

“You cannot shoot fireworks inside the city limits, but people do it anyway because of the holidays,” said Police Chief John Brock. “We can only go by the law, but if you’re going to do it, we can only ask that people be safe.”

Brock said it would be difficult to enforce the ordinance to its fullest extent because of the sheer number of people who shoot fireworks for the Fourth of July.

He said officers will be working extra hours over the weekend to make sure the celebrations don’t get out of hand.

“When alcohol gets involved, you do crazy things,” Brock said. “There’s always once in every couple of years [that] we have somebody get hurt with a firework exploding in their hand, get hit by one or something like that.”

Brock advises people if they are going to shoot fireworks to be careful on how and where they do it.

He said children should not be around fireworks without supervision and people should be mindful to the threat of fires.

If consuming alcohol and traveling, people should designate a sober driver.

Selma police will have more emphasis on traffic details over the weekend to curb drinking and driving.

In the state of Alabama, anyone driving with an alcohol percentage of 0.8 or more is considered driving under the influence, Brock said.

Brock said celebrations need to wind down Monday evening before too late.

“People [will be] trying to sleep because they have to go to work the next day,” Brock said.

In addition, Brock said people shouldn’t be alarmed by the noises from the fireworks. If you don’t know what to listen for, fireworks can frequently be mistaken for gunfire.

“But we still want people to report if they hear anything, see anything [suspicious or unusual],” he said.