Local football stars return to talk with All in Sports’ campers 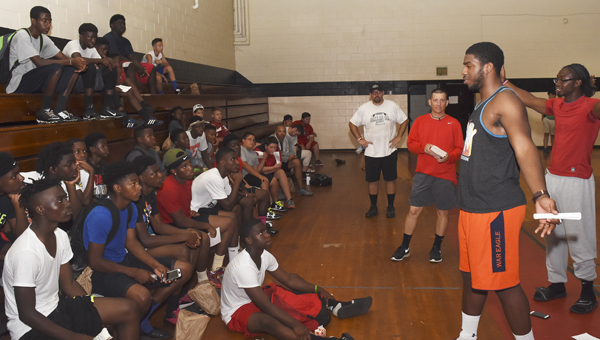 Presumably, every camper at this week’s football camp at Southside High School wants to one day play collegiately or make it to the professional ranks. On Wednesday, they had a chance to hear from players who have done just that.

“When you’re organizing an event like this, it’s great to see guys like Keymiya and Deondis who walked the same streets these guys walked and can talk to them about putting your hope in more than just football,” said Stewart Hardy with All in Sports Outreach, which organized the camp.

Harrell was a standout defensive end at Dallas County High School and was a highly recruited player within the state of Alabama. He suffered two ACL injuries during his time at Auburn, which derailed what looked to be a promising career.

“Everybody loves to play football, but we are trying to get them to see ‘hey, it’s more than just football,” Harrell said. “There are other things out there. We are just trying to teach them about getting their education, being respectful to your elders, teachers and stuff like that.”

After workouts, which included 7-on-7 drills, the players went into the Southside gymnasium for lunch and had a chance to hear from Mendenhall and Harrell, who both volunteered their time to help with the camp. All in Sports’ mission is to use sports to spread the word of God.

Mark Cusano, who played football at the University of Southern California from 1995-1999, has also helped with the camp all three days this week.

“Football camps like this, you want the older kids to pick up one or two tips they can take into the season,” Cusano said. “And then also that God is huge. He matters and he’s what gives joy to your life, happiness to your life and he’s the reason we are all here. Because he loved us so much, we want to then show his love to everyone.”

All in Sports Outreach is also hosting basketball camps this week at R.B. Hudson Middle School and at the lot between Selma Avenue and St. John’s Street.

“They’ve gotten that Jesus loves them more than anything,” said Weston Mason, who is overseeing the camp at R.B. Hudson. “I think that they understand that and that even through sports they can use sports as a vehicle for their salvation and for Jesus Christ.”

The camps will wrap up Thursday and will run from 9 a.m. until noon.