All in Sports shares more than fundamentals at camp 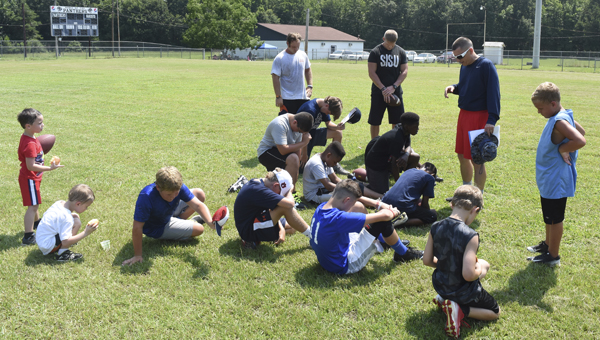 All in Sports organizer Stewart Hardy leads at prayer on the football field at Southside High School Monday. –Daniel Evans

Around 50 youth took part in day one of All in Sports Outreach’s football camp Monday at Southside High School. By the time the camp ends on Thursday, participants will learn at least two offensive plays, but they’ll also know several lessons from The Bible.

“We told our group of volunteers this morning that we want to teach football skills with excellence, but if that’s all we do … then we might as well go home,” said All in Sports organizer Stewart Hardy. “Anybody can do a football camp, but if we incorporate these talks and these truths of scripture and how to apply them to every day life and one kid makes a life change, then the whole thing was successful.”

At times on Monday, the campers ran through plays as if they’d practiced them hundreds of times — running the right route, throwing perfect spirals and completing catches way down the field.

Other times it wasn’t as pretty. Players forgot their route or dropped a pass that hit them right around the hands. The mistakes seemed only fitting, given the message All in Sports had planned for Monday.

Hardy and other camp organizers used timeouts to talk about the story of Jonah from The Bible. Jonah defied God’s command to go Nineveh and ended up in the belly of a fish for three days and three nights. In the end, he received a second chance from God and redeemed himself.

“We all like second chances right?” Hardy said. “In the game of football when we drop the ball, we don’t want the game to be over. We want to get to the next play. Well, it’s the same thing in life.”

Monday’s message resonated with many at the camp.

“Most of us coming from where we’re from, people don’t take the time to talk to us like that,” said Southside’s KeAndrae Rutledge. “They let us know that God is here at all times. He sees everything we do and he has our life planned out for us already. He is just letting us know that no matter what you do God is with you and he will forgive for you anything.”

Participants were broken down into two groups — with those in eighth grade and higher in one group and those lower than that in another.

The older students were mostly from Southside High School, but students also participated from Montgomery Academy and other nearby schools. The camp is free and will continue through Thursday, so anyone between ages 6-18 wants to participate is welcome, Hardy said.

All in Sports is also hosting a basketball camp at R.B. Hudson Middle School and at the lot between Selma Avenue and St. Johns Street. The group also held a concert on Sunday evening at Brown Chapel AME Church.

The camps are being held from 9 a.m. until noon each day. For more information, visit All in Sports Outreach’s Facebook page.