TNA Heat teams face off against each other during tournament 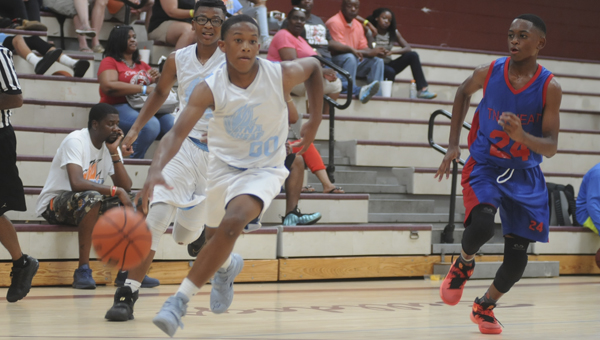 TNA Heat Edwards had control the whole way over TNA Heat Ellis through in a rare opportunity for two local AAU basketball teams to play in their home town against each other.

The eighth grade teams had met each other before, with TNA Heat Edwards winning each time, but head coach Derrick Edwards said he was impressed at how strong his team’s performance was this time around in a 44-26 victory Saturday at R.B. Hudson Middle School during the fourth annual Selma Invitational.

“It’s like a rivalry game, so I really expected the game to be a lot closer, but we got out to an early lead,” Edwards said.

“Our defense played offense and everybody who came off the bench had the same effort.”

Edwards said similar to the relief of seeing each player contribute was being home in front of parents who were able to watch their kids compete without traveling.

Edwards, who coaches three AAU teams, said it’s nice for him too to have a break from going far from home.

Since March, we’ve been traveling all across the state, and finally we come home to play in front of our home crowd, it’s awesome. We love it. The kids are having an awesome time and so am I,” Edwards said.

Nathan Ellis, head coach of TNA Heat Ellis, echoed the same sentiment, and he said it’s not often this many people come out to support a sporting event in the summer.

“We want the support from the community, and so far it’s been outstanding to get that many people out,” Ellis said.

In a game both coaches called a rivalry, there wasn’t much back and forth between the two teams. TNA Heat Edwards took control early and didn’t let go.

After TNA Heat Edwards raced out to a 10-3 lead, Derrick Griffin extended the score to 16-6 soon after with a block turned into a fastbreak layup.

TNA Heat Edwards didn’t let up in the second half. Michael Harris made a layup to give the team a 31-16 advantage. Griffin made a layup as he bulldozed his way through two defenders with 12:40 on the clock to extend the lead to 33-17.

Justin Buford drove baseline with 6:30 remaining to knock down a layup to really put the game out of reach at 39-22.

Each team would score a few more baskets before the game was over, but TNA Heat Edwards was able to secure a 18-point victory. Edwards was proud of the way his defense performed in the win.