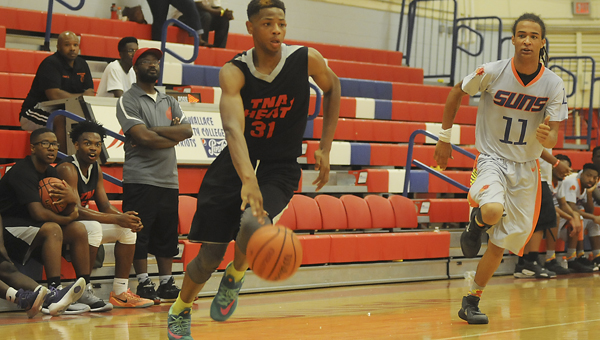 Christopher Lee of the TNA Heat’s 10th grade team dribbles the ball toward the basket during a game against the Montgomery Suns Saturday at Wallace. — Justin Fedich

With just a few minutes on the first half clock, the TNA Heat’s lead was slowly slipping to the Montgomery Suns. With the TNA Heat in front 24-19, the players decided they wanted to feel a little more comfortable before halftime and ended the half on a 10-0 run.

“They refocused and came back and came out with the victory,” said head coach Randy Fincher.

The Suns tried to come back during the second half, but the Heat left them no room.

Andre Hall followed his own rebound with the clock winding down to make it 64-50, and the TNA Heat won comfortably.

Fincher said the team is beginning to get more comfortable with each other as the season has moved forward.

“They’re starting to gel now, starting to play together as a team and during the course of the season, we’ve been getting better as the season’s gone along,” Fincher said.

With the team having to travel most of the season, Fincher said all the players look forward to having a game at home so they can play in front of their parents and friends.

It was clear the players were enjoying themselves playing at home Saturday, as they were having fun with each other on the bench the whole way through. Being in the lead the whole time didn’t hurt matters either.

“The kids like having the game at home,” Fincher said. “They get to play in front of all their friends and family.”