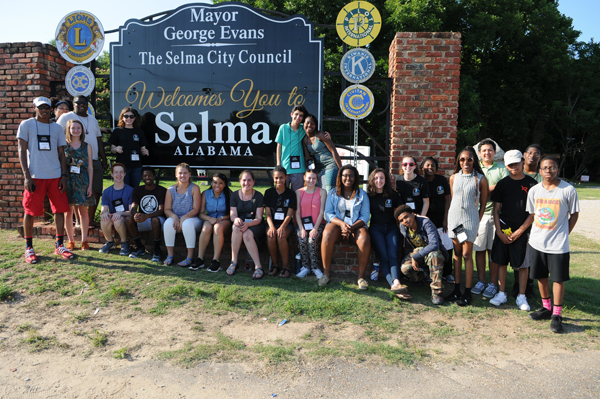 Students from Cultural Leadership, a non-profit organization based in St. Louis, pose in front of the Selma sign after visiting various sites in Selma and walking across the Edmund Pettus Bridge.

A group of 24 African American and Jewish high school students from St. Louis traveled to Selma Thursday as part of the group’s year-long program learning about other cultures and working toward ending racism and anti-Semitism.

Students from Cultural Leadership, a non-profit organization based in St. Louis, experienced some of the history of Selma during their trip, and many of the students said the trip was worthwhile in teaching lessons they can take home with them.

“It’s hard to put into words how amazing it is to see and walk where leaders like Martin Luther King and Jesse Jackson and John Lewis walked across this bridge against fighting oppression,” said Jewish student Max Baker.

The group began their day doing a slavery simulation.

They followed by visiting Brown Chapel A.M.E. Church and Temple Mishkan Israel. Finally, before the Cultural Leadership group departed, they walked across the Edmund Pettus Bridge.

This was the 16th day of the group’s trip. It began up in New York, Philadelphia and Washington, D.C., and the trip is ending by traveling through the civil rights trail through the south.

Zoe Robinson, an African American student, said the trip to Selma reminded her just how important it is to know history

“We’re here, all of us, trying to make sure that our history is remembered and also that future generations will know what people sacrificed in order for us to be here today,” Robinson said.

The students said one moment that stuck out to them during their visit to Selma was the Brown Chapel A.M.E. Church. Baker said it was a cool moment to see the spot that Martin Luther King Jr. spoke at.

“That was pretty amazing to get to see where he stood,” Baker said.

At Temple Mishkan Israel, the students learned about the Jewish history in Selma, and Baker said it was a cool experience getting to see the students in the group who weren’t Jewish so eager to learn about the temple’s history.

Erin Grossmann, a Jewish student, admitted that she’s not as connected to Judaism as she would like to be, but seeing how dedicated Selma is to preserving its Jewish history despite not having a huge Jewish population inspired her.

“It was really meaningful for me because it made me want to connect back to my [Jewish] community,” Grossmann said.

The walk across the Edmund Pettus Bridge also allowed the students to feel connected to the history of Selma, following the footsteps of civil rights leaders who came before them.

There were a lot of historical lessons taught to the students from Cultural Leadership on Thursday, and their focus is to take the lessons to be proponents of change for the future.

“As young leaders, we are now learning how to do that and taking what they taught us and seeing how they did it and trying to become leaders ourselves in our own communities,” Baker said.