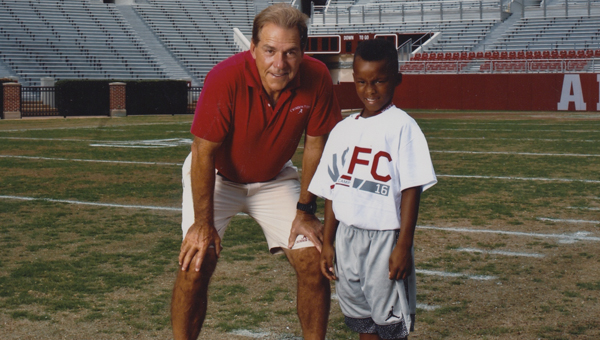 Omari Smith is just 8 years old, but he already has plenty of confidence in his athletic abilities.

“I am going to play for you one day,” Smith said to University of Alabama head coach Nick Saban.

Smith attended the 2016 Nick Saban Football Camp from June 12-15, a non-contact camp that teaching skills designed to give each athlete a solid foundation in football fundamentals. The camp was led by Saban and his staff and each player received hands-on instruction through drills and practices that simulated those of the Crimson Tide football team.

During Smith’s time at the camp, Smith, a rising third grader at Payne Elementary School, participated in 7-on-7 drills and recorded two catches and three touchdowns. On the defensive side of the ball, he recorded one interception.

Comments from coaches regarding Smith included compliments of his footwork, change of direction, attitude and effort. Due to his strong performance at the football camp, Smith was nominated for the Youth Southeastern Conference All-American Bowl by other coaches from around the southeast.

For those who know Smith best, his ability to excel at the football camp is no surprise. In addition to his strong play on the football field, Smith is an A honor roll student.

This past year, Smith was awarded a certificate of achievement for top performance in social studies, mathematics, reading, science and English. He also received the superintendent’s physical fitness award.

Smith will be going into the third grade next school year.

His parents are Marlon Smith and Keosha Beans.

Marlon said that his son Omari understands that he must have commitment, discipline, effort and pride if he wants to get to the next level.