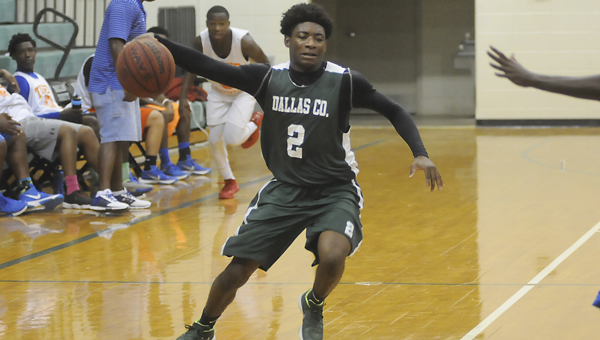 Dallas County’s Mario Simmons dribbles down the court during a play date game between the Hornets and the Chilton County Friday at Dallas County. Simmons made three 3-pointers in the game, including one with 47 seconds left to give Dallas County just enough of a lead to hold off Chilton County. — Justin Fedich

Dallas County led the whole way through, as Chilton County wasn’t able to tie the game until there was 1:36 remaining. With 47 seconds on the clock, Andre Hall inbounded to an open Mario Simmons in the corner, and Simmons drained a 3-pointer to give Dallas County the cushion it needed to pull out the win.

They made a run at it late to cut it when we were up nine, but we didn’t lose our poise, where at times last year we would, so I guess that’s the maturation process, so I was pretty pleased with our effort,” Moore said.

Dallas County’s defense was tenacious all game long, but it made a difference especially early on in the game. It took Chilton County more than eight minutes to score its first field goal, as five early points from Hall put the Hornets ahead 7-0.

Dallas County maintained a sizeable lead throughout the first half. A hook shot from Floyd Crusoe extended the Dallas County lead to 9-1, and a 3-pointer from Simmons pushed the Hornets’ advantage to 12-4.

Hall connected on two consecutive driving layups to make it 20-11 in favor of Dallas County at the half.

Chilton County opened the second half with four straight points, but Crusoe hit a layup to increase the Hornets’ lead to 22-15. The Tigers started coming back, narrowing the score to 24-19, but a Kendall Thomas 3-pointer put Dallas County once again comfortably ahead 27-19.

The Tigers weren’t done, however. Chilton County responded with five straight points to make it a three-point game. With 3:54 remaining, Simmons hit another 3-pointer to give Dallas County a 32-27 lead.

Another 5-0 run from Chilton County tied the score up with only a minute-and-a-half to play. It was the first time the game had been tied since 0-0.

“Miscommunication with our defense allowed them to get back into the game,” Moore said.

After Simmons rose for his third 3-pointer of the game, the Hornets had 47 seconds to make sure the Tigers weren’t able to come back. Chilton County narrowed the Dallas County lead to one, but Hall took the time almost all the way down on the next possession before getting fouled.

With only one second on the clock, a Chilton County halfcourt heave flew past the basket and Dallas County survived a game it never trailed in.

One of the keys to Dallas County’s win was getting after offensive and defensive rebounds all game. Moore said he is focused on getting his team to rebound the basketball more this season.

“That’s an emphasis because we don’t have a whole lot of size, and we need to make sure that we’re sending four or five men to the glass at all times,” Moore said.