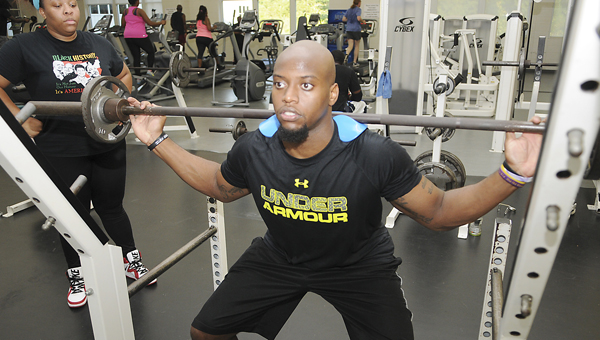 Darion Alexander has been the health director at the YMCA of Selma-Dallas County for the past three-and-a-half months, helping people of all ages achieve a wide range of health goals. He manages this while taking care of his mother, Karen Alexander, who is fighting cancer. — Justin Fedich

On Aug. 7, 2015, one week before Darion Alexander was supposed to start physical therapy school, he found out his mother Karen Alexander had been diagnosed with stage four cancer. With no one else able to care for her, Darion knew he needed to move back to his hometown of Selma to help his mother fight the disease.

At 22 years old, Darion has found a home at the YMCA of Selma-Dallas County while he assists his mother. He was hired as the health director on March 4, and since then, it’s hard to find anyone at the YMCA who has anything bad to say about him.

As a former quarterback and halfback at Miles College, Darion was used to a loaded schedule when he came back to Selma. Even he admits, however, some days he can feel pretty drained.

“Not sleeping a lot in college helped me to not sleep a lot now, because sleep is at bare minimum right now,” Alexander said.

Each day Monday-Friday, Darion wakes up at 4:30 a.m. and trains seven area high school athletes from 5-6:30 a.m. He then teaches a circuit class for the next hour and is a personal trainer for the next three hours before he returns home at 10:30 a.m. to be with Karen. He returns from 4 p.m. until the gym closes at 8 p.m. for more personal training and does it all over again. While the schedule can be exhausting, YMCA of Selma-Dallas County chief executive officer Ann Murray said it’s hard to know Darion is ever tired.

“He meets and greets people at 5 a.m. like long-lost friends and he has a great personality and he’s quite the motivator,” Murray said.

One of Darion’s clients, Farrah Cureton, trained with Darion on Thursday evening, and Darion was right by her side the entire way, performing every exercise with her and keeping a smile on his face.

“Everyone enjoys him because of his personality, and you can tell that he loves what he does,” Cureton said.

Others sometimes question how Darion always seems so upbeat despite the challenges his mother is facing. Darion said it’s his job to stay positive for his mother so he can help her beat cancer.

When Karen was first diagnosed, doctors told her she had only months to live, but through plenty of chemotherapy and a recent bone marrow transplant, she is doing much better, and in turn, she helps Darion achieve his goals.

“She has motivated me to a whole other level, just seeing her fight cancer, I come in here and I know I don’t have an excuse,” Darion said.

At the YMCA, Darion said he doesn’t just view his job as an opportunity to get others in shape, but to enable them to better their lives physically, emotionally, mentally and spiritually.

Murray said Darion’s ability to go above and beyond his work description gets noticed by the people he trains.

“I think what’s great about Darion is that he’s not just concerned about people’s physical well-being,” Murray said. “He’s just a person who’s full of character and integrity.”

The biggest piece of advice Darion gives his clients is “don’t quit.”

Coincidentally, he doesn’t have to change that message at all when he returns home to be with his mother.

“You’ve got to go through those difficult things to get where you want to go,” Darion said.

“There’s always strength in the struggle.”