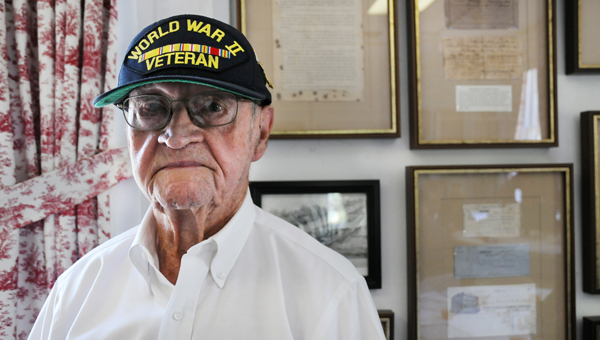 Soft music reminiscent of the early to mid 1900s played on the radio in a back room of the Vaughan-Smitherman Museum on Wednesday to set the mood for a reunion of war heroes.

The United Daughters of the Confederacy held its fifth annual reception to honor World War II veterans. This year, Korean Conflict veterans were invited to reflect on their years of service.

Pat Godwin, president of the organization’s local chapter, said the program is a collective effort to honor war veterans before it’s too late.

“It’s probably the most gratifying event that we do,” Godwin said. “This is just what we do for them [now] because we have Memorial Day that honor the veterans after they’ve passed.” 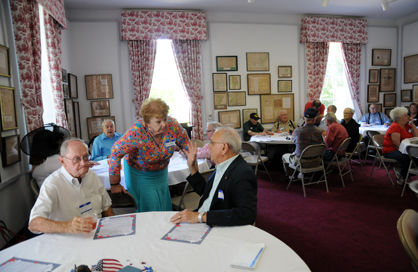 In previous years, the reception was specific to World War II veterans. This year the group decided to invite the veterans of the Korean War. In upcoming years, Vietnam veterans will be invited to the annual reception.

“I think it’s just great for the veterans, for all of us to be remembered,” said Helen Lattal, World War II veteran. “It’s an honor for us to be here.”

The afternoon was a time spent for eating good food, reflecting on their years of service and sharing war stories. A little over 20 local World War II and Korean War veterans were in attendance.

Lattal was one of two female war veterans at the reception. Lattal enlisted in 1942 and called for active duty in 1943. Shortly after completing basic training and army administrative school, she was selected for overseas duty. During her three years, she served in England, France and Germany.

Don Carter, Korean veteran, brought in a file folder with a certificate of his award, Distinguished Flying Cross, and newspaper clippings of when he was bestowed the honor, which was nearly 22 years after he earned it.

“You don’t win these,” Carter said pointing to the papers. “These are awarded for something you did.”

When he earned it, he was a staff sergeant in the U.S. Air Force working as the radio operator on an unarmed, unescorted C-47 aircraft transporting a classified intelligence mission in support of the United Nations effort in Korea.

Carter said he is glad the organization is taking the time to honor veterans and wishes more people would do the same.

“What they need to do is honor all veterans and all military people. You don’t see much of that anymore,” Carter said. “I just appreciate what these people are doing.”