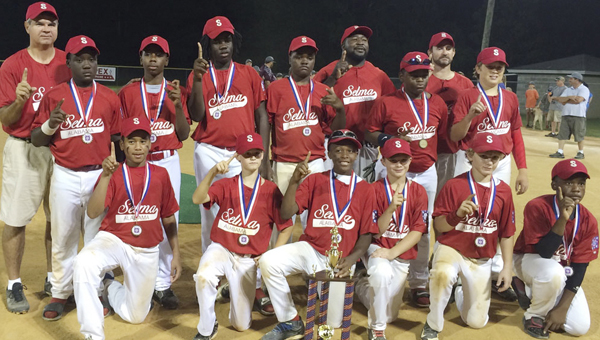 Selma’s AA, AAA and O-Zone teams all won games Tuesday night. The Selma AA All-Stars, or 7-and 8-year-old team defeated Thomasville 11-1 to advance to the state tournament in Wetumpka on July 8.

The 11-and 12-year-olds defeated Eclectic 18-0 to win the sub-district tournament in Holtville.

“I think we have a pretty good league and it just shows the coaches we have are good coaches, and we have some good talent around here,” said city baseball and softball director Gerald Barron.

Barron said he thinks all three teams have a chance to move onto the state championship and compete for the overall crown.

Other Selma teams are also still playing. The 13-year old-Selma All-Stars will go straight to their state tournament in Dothan July 18 and Selma’s 14 year old team will play in their subdistrict tournament starting Friday night in Thomasville.

Here’s an update on the winners form Tuesday night:

Before every game, Selma’s 7-and 8-year-old All-Star team gets fired up with a chant started by coach Calvin Pritchett.

“That gets them pumped up,” said coach Quinn Pernell.

Whatever the team is doing must be working. Selma defeated Thomasville 11-1 Tuesday night to win the region 4 AA district tournament and to move on to the Selma American Dixie Youth state tournament in Wetumpka on July 8.

The Selma All-Stars won all three of their games in the district tournament by at least five runs or more.

“I’m so proud of this team and the good thing about it is we are getting better every game,” Pernell said. “We went from making nine errors a game to six errors a game to last night basically no errors.”

The team won all five of its games in the sub-district tournament, defeating Eclectic three times and Holtville twice.

“We really batted very well,” said coach Jason Rogers. “Our defense wasn’t up to par like it’d normally be, but we did enough to get by. Our bats came alive.”

The Selma All-Stars had to overcome a 4-0 deficit early, but did so with seven runs in the bottom half of the first inning.

“From there, they never caught back up with us,” Rogers said.

The district tournament will start at the Dallas County Sportplex Friday at 6:30 p.m.

The Selma 11-12 All Stars won the District 4 North Sub-District tournament in with an 18-0 victory over Eclectic in the championship game Tuesday in Holtville.

Selma won the round-robin tournament by going undefeated in five games and outscoring its opponents 85-7.

“It was unbelievable,” said Selma head coach Jerome Hand. “The boys played great in all phases of the game. We hit the ball and ran the bases. Our pitching was outstanding. We only walked a handful the entire tournament, and on defense we only made one error in five games.”

It was a dominating performance from Selma. None of the tournament games went further than six innings. All five games ended after the third or fourth inning due to the 15-run or 10-run mercy rule.

In the opening doubleheader on Thursday, Selma routed the host team, Holtville 21-2. Aaron Strong led the hit parade with a grand slam and Derrick Brown knocked in three runs with three hits. In the second game against Eclectic, Matthew Hand struck out four batters in three innings of work in a 17-4 victory. JaMicheal Goings, Nathan Johnson, Matthew King, and A.J. Vaughn all had doubles to pace the offense, and all 12 Selma players scored at least one run.

After a rain out on Friday, Selma blanked Holtville 11-0 on Saturday night with pitchers Josh Brown and Derrick Brown combining for a no-hitter. On offense, Kemari Eaton, Hand and Johnson hit doubles to the outfield fence. Monday night, Tae Spears and Josh Brown homered to lead Selma to an 18-1 win over Eclectic. In the championship game on Tuesday night, Josh Brown hit another home run, and Kenneth Dukes, Derrick Brown, and Ben Feister had two hits apiece.

“It was a terrific team effort,” Hand said. “I’m really proud of these guys. They really bonded in a short amount of time and went on the road and took care of business. Hopefully, we can keep it rolling in the district.”

Selma and Eclectic each qualified for the district tournament which will begin Friday in Grove Hill.

Selma will play Monroeville at 6 p.m. on Friday night in the opening game.

“We’ll go wherever they tell us to and play whoever lines up against us,” Hand said.

“These boys have worked hard, and they’ll play with fire and guts and leave it all on the field, and that’s all you can ever ask.”

Information on the 11-and 12-year-old All-team was submitted by coach Jerome Hand.