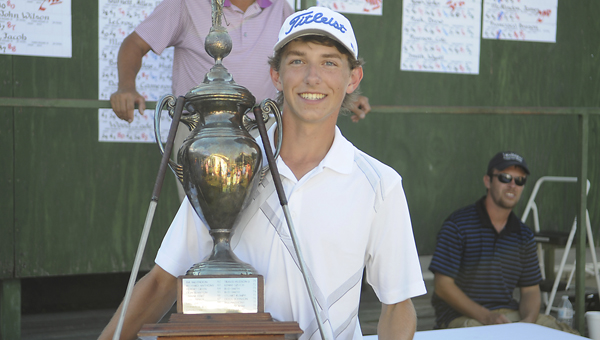 When the final two golfers walked to the tent to hand in their scorecards Wednesday at the Selma Country Club, Riley Thrasher was told that he had won the 55th annual Bud Burns Dixie Junior Championship, and he couldn’t keep the smile off his face.

“It was unbelievable. It’s something I can’t even imagine,” Thrasher said. “I dreamed of doing this since I started, and now that I’ve finally done it, the feeling is something very special.”

Thrasher, a 16-year-old from Trinity — a town in Morgan County — shot a 1-over 72 on in the final round of the 54-hole tournament to win the tournament by three strokes with a 221. Even though his final round sealed the win for him, it was a shot Thrasher hit on Tuesday that will stick out in his mind the most from the three-day competition.

On the 15th hole in the second round, Thrasher stepped up to the par-3 tee with a 9-iron. With the wind blowing in his face, he decided to switch out his 9-iron for an 8-iron. When the club on his punch shot lined up with the flag on the green, Thrasher knew something special was about to happen.

“I saw it hit once, I dropped my club in my hands, it went in and I just screamed,” Thrasher said.

The shot was Thrasher’s first hole-in-one in a tournament, one of many accolades he achieved in Selma over the three-day span. Thrasher edged out Cody Maddox, a 17-year-old from Guin who hit the best final round of any golfer at even par 71. Maddox won the 17-and 18-year-old division with a 224 and finished second overall.

Sam Martin won the 10-and-under age group with a 107 18-hole score, and he said he’s ready for a bigger challenge.

“There were only two people,” Martin said. “I wanted more competition because I’m really competitive.”

Thrasher also put his victory in perspective after he raised the trophy that many professional golfers, including Bubba Watson and Stewart Cink, have won in the past.

“I’m still disappointed. I really wanted to come in the 60s,” Thrasher said. “I’m so glad I won with that score, but it really could have been better.”

For Thrasher, that’s a high bar to set, considering he has only been playing golf competitively for two years. Bill Wilcox has been the executive director of the Alabama Junior Golf Association for five years, and he’s watched plenty of talented golfers earn college scholarships. Wilcox said Thrasher will likely be following close behind that same trend.

“I’m sure we’ll see Riley playing college golf in the not-too-distant future,” Wilcox said. “Most of these golfers will go on to play college golf. In fact, several of them already have college scholarships.”

While Thrasher described winning the tournament as a dream come true, he still has many more dreams that lie ahead.

“It’s just going to get bigger and bigger,” Thrasher said.

“If I can do this much in this amount of time, there’s no telling what I can do if I put my mind to it.”