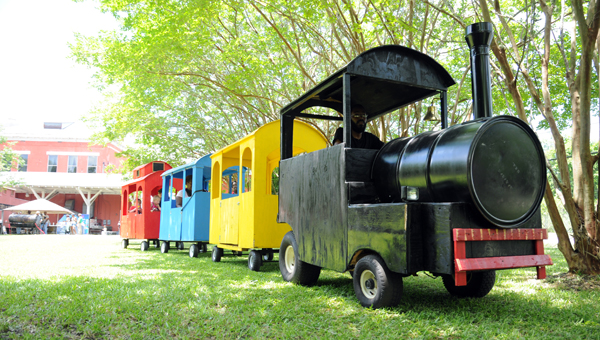 Alabama Operation Lifesaver (AL OL) provided a day of fun Wednesday while teaching children and parents the dangers of railroads crossings and how to cross them safely.

AL OL held a Rail Safety Day at the Old Depot Museum on Wednesday. The event included safety presentations from the Selma Fire Department, Pioneer Electric and other agencies. It was free and open to the public.

“If I can convince one person to not take a chance at that crossing, I feel like maybe somewhere along the line, if we save only one person, it’s been worth everything,” said AL OL director Nancy Hudson. “Your life is worth the wait.”

Established in 1976, AL OL is a non-profit safety program with the purpose of educating the public to reduce death and injuries at railroad crossings. It is a member of the national organization, Operation Lifesaver Inc.

After listening to a brief lesson on railroad safety, children and parents were invited to enjoy the activities.

Zeigler donated hot dogs and the Kona Ice truck was available to serve up cool treats. The fire department brought its inflatable Fire Safety House and free train rides were given.

“We want to talk about being safe around trains, but we also want it to be fun,” Hudson said.

Ruby Fuller attended the event with her daughter and three grandchildren. Fuller believes it is important for children to learn safety at a young age, especially after witnessing a severe accident a few years before.

“He was trying to beat the train,” Fuller said. “His leg was amputated from the accident.”

“Alabama is currently ranked number six in the nation for the number of vehicle and train collisions,” Hudson said. “So when you think about Alabama ranking sixth, that puts us up there with states that are bigger than us. We want everybody to learn that when you see tracks, you think train.”

For more information about AL OL and its programs, contact Hudson at alol@att.net.