Cornelius, Burt lead boys tourney after round one 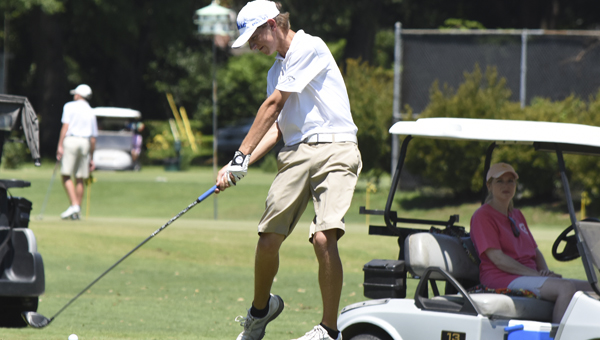 Riley Thrasher, from Trinity, hits a tee shot on the first hole during the first round of the 55th annual Bud Burns Championship. Thrasher shot a 5-over, 76, and is four shots behind leaders Owen Burt and Gauge Cornelius. — Daniel Evans

The easy part is over for the boys competing in the 55th annual Dixie Junior Championship at the Selma Country Club.

The boys completed their first rounds on Tuesday with Millbrook’s Owen Burt and Luverne’s Gauge Cornelius leading the way after a pair of 1-over 72s.

After playing 18 holes Tuesday, many of the players will play 36 holes on Wednesday, depending on whether or not they made the first round cut.

Cornelius took a similar route to the top of the leaderboard, making birdie on the first and tenth holes.

Like Burt, he also had three bogeys, which kept him over par on the day.

Maddox was only one shot back heading to the 18th, but he made double bogey to fall to 4-over. Spehar double bogeyed the 16th, but birdied the last to get to 4-over and within three shots of the lead.

Players between 15 and 18 compete for the overall championship and play the blue tees.

Of the Selma golfers in the 15-18 age group, Thomas Morris fared the best. Morris shot a first round 79, including making a birdie on the par-4 third hole. David Cothran had a first round 91.

The 13-and 14-year-olds play the white tees and are not eligible to win the overall tournament.

Selma’s Gus Colvin and Arrington Mooney were also in the 13-14 age group. Colvin shot an 84 and Mooney  shot 91.