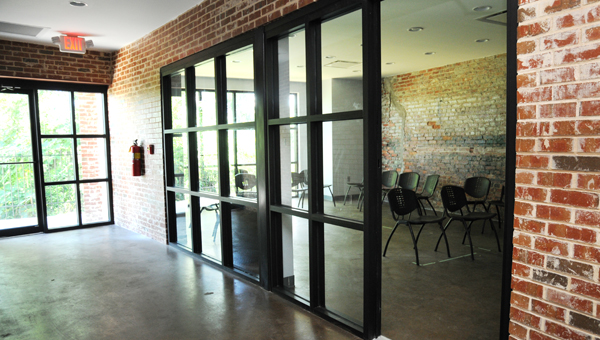 ArtRevive has finished part of a project on its Carneal Building, including adding a conference room and small studio space. Future planned renovations including rebuilding the pavilion as well as adding heating and cooling systems. ArtsRevive is in the middle of a capital campaign to fund the finishing touches as well as match a grant from the Alabama State Council on the Arts.

ArtsRevive has been making strides in the past few months despite construction on Water Avenue, but the group has put a hold on renovations while raising money to help finish the Carneal Cultural Arts Center.

The Alabama State Council on the Arts recently awarded the organization $25,000. However, to realize the full amount, ArtsRevive must match the grant three-to-one and raise $75,000.

ArtsRevive executive director Martha Lokett said the money will be enough to rebuild the pavilion.

“We hope by this time next year that it is finished, that it is polished and that it has a bow on the front door,” Lockett said.

In addition to the pavilion, doors will be replaced with doors that fit better and have insulation; a heating and cooling system will be installed; and lights will be added.

Lockett said total expenses are expected to be about $325,000.

The group will be working up until the first of next year to raise money before they resume renovations.

“If we don’t have the money, we don’t do the work,” Lockett said. “We raise money, do the work and write the check.”

So far the campaign has been able to successfully stabilize the courtyard and brick wall, update electrical and plumbing, add two ADA compliant bathrooms and finish out the conference room.

Even though construction has been put on hold, the building won’t sit vacant.

Lockett said although the building isn’t where they would call complete; it has been reopened for private rentals until construction continues.

She said the building has been rented out for five different occasions throughout September and November.

“Once people heard it was back on the market, they were calling,” Lockett said. “People love that space.”

Lockett said the closure of the intersection of Water Avenue and Church Street did not impact the campaign’s progress. The closure began as the outside construction for Carneal was wrapping up.

“That’s when we made the decision to shut down construction [and to] focus on raising the rest of that money,” Lockett said. “So when the first of the year comes we will have the cash on hand and we can finish.”

When finished, the center will be used to host art classes for children and adults; provide a space for national and regional exhibitions; and be a venue for meetings, parties, music events and other small occasions.

Lockett said the project wouldn’t have been possible without supporters.

“We’ve been astounded by the generosity of folks who are saying this is worth a special gift,” Lockett said. “We are really grateful.”