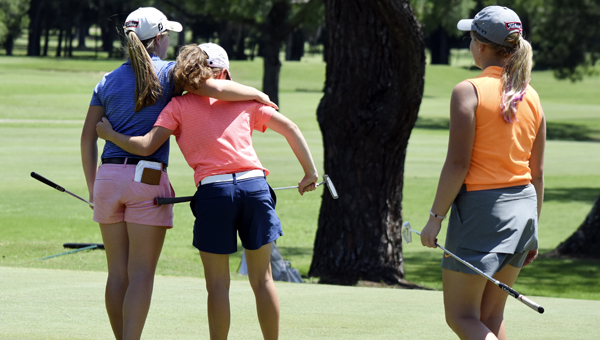 Troy’s Susie Stell didn’t play her best golf in her first visit to the Bud Burns Dixie Junior Championship last year, but she’s figured something out in her second visit to the tournament. After one round this year, Snell is right around the leaders.

“I didn’t play as well as I wanted to last year,” Stell said. “Definitely an improvement this year.”

Stell chipped in for par on the third hole and shot a first round 76, which has her five shots behind two time defending champion Brooke Sansom, who shot an opening round score of 1-under, 71.

“It gives you some momentum, gets you a jumpstart,” Stell said of her chip in par save.

Stell and the rest of the field have their work cut out for them if they’re going to take down Sansom, who bested the field by 11 shots last year. Sansom, from Pike Road, birdied 1, 11 and 18 to offset bogeys at 10 and 16.

She has a four shot lead over Hannah Pope from Florence going into the second round.

If she can hold on and win again on Tuesday, she’d be the first girl to win the tournament three times, according to the Alabama Junior Golf website. John Michael O’Toole is the only boys player to win the event three straight times.

Alyssa Burnett was 5-over after an opening round 77 and Mary Katherine Horton, who was playing at the Selma Country Club for the first time, was another two back after a 79.

Horton hit her approach shot out of bounds on the par 5, 18th and had to settle for a bogey to end her day.

“I missed some putts and hit it out of bounds on the last hole,” Horton said. “I really shouldn’t have done that, but tomorrow I think I’m going to putt better. Since this is the first time I’ve played on this course, I think my score tomorrow will be a lot better.”

On Tuesday, the 16 player girls field will complete the tournament.

The boys tournament will start Tuesday and will wrap up Wednesday afternoon. Many of the boys competitors played practice rounds Monday.

Bill Wilcox, executive director of the Alabama Junior Golf Association, said the Bud Burns is the biggest tournament of the year for the AJGA.

There are 92 players in the 2016 field, which is down a little from previous years.

Wilcox said a scheduling conflict with the Junior Masters in Dothan probably limited this year’s field a bit, but he was still happy with the overall number.

“We get a good crowd and its’ just watching these juniors enjoying themselves,” Wilcox said.

Temperatures reached the high 80s on Monday, but were expected to move back into the 90s for Tuesday and Wednesday.

Wilcox said tournament organizers are making sure to stress the importance of staying hydrated to those competing in the tournament.

At last year’s event, Anniston’s Trevor Lane was taken to the hospital after passing out in the heat.

“We will get a water cooler and go out on the course and make sure the kids have plenty of water,” Wilcox said.

“We don’t rely just on the water coolers that are at certain holes. We are bringing water to the players to make sure they stay hydrated.”