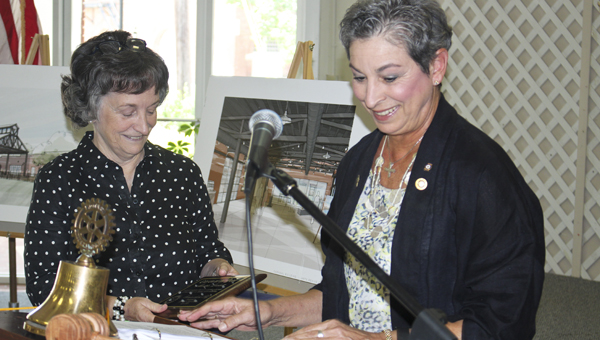 ArtsRevive executive director Martha Lockett (left) was named the Selma Rotary Club’s Citizen of the Year on Monday. Lockett thought she had been invited to speak about ArtsRevive but was instead surprised with the award by club president Manera Searcy.

Lockett attended the club’s weekly meeting at Church Street Methodist Church’s Windham Hall thinking she would give an update on ArtsRevive.

Instead, she was surprised with the honor and named a Paul Harris Fellow, one of Rotary’s most prestigious acknowledgements.

“The Selma Rotary Club selected Martha for this recognition as a special expression of appreciation for the work she does for our community,” said Club President Manera Searcy. “Martha works tirelessly to enhance our community by promoting art and culture that is available to every citizen.”

Lockett has led ArtsRevive through a recent renovation of the Carneal Building and capital campaign. In addition to her work with ArtsRevive, she serves on several boards and committees, including the Black Belt Community Foundation, the Alabama State Council on the Arts and Main Street Selma.

“I would have had a thank you speech ready if I had known,” said Lockett, who joked that she thought she was coming to ask the club for a donation to ArtsRevive. “I thank you for this, and it certainly was not anything that I expected, but I appreciate it. It’s nice when a group knows that the work they are doing makes a difference.”

Lockett also thanked the Rotary Club for its support of ArtsRevive over the years and for what the club does in Selma.

In addition to a Paul Harris Fellow certificate, Lockett was also presented a plaque and pin from Searcy. Lockett joins a long list of past Rotary Citizen of the Year honorees, including Juanda Maxwell, Kathi Needham, Fran Pearce and the late Jean Martin in recent years.