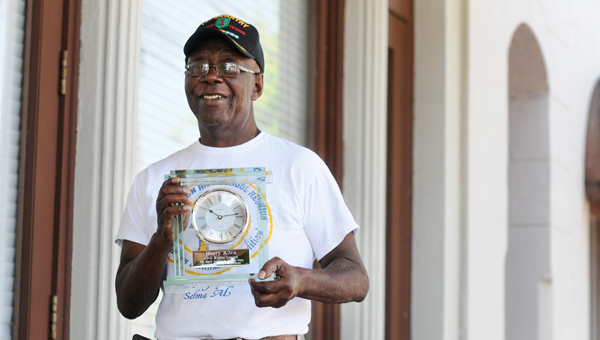 By Samantha Bolden | The Selma Times-Journal

“I feel very humble because it was very unexpected, but it goes back to the amount of work over the years that were contributed,” Allen said.

Allen has blazed history as among the first African Americans to join the Alabama National Guard. He was also Selma’s first black firefighter and fire chief.

The Selma native also played a role in getting the name of the Selma Middle Chat Academy changed to R.B. Hudson Middle School.

He was instrumental in bringing the community together to change the name of the school he attended from East End Elementary to Sophia P. Kingston Elementary.

Changing the name was important to him because Sophia P. Kingston was a woman freed from slavery who started the school in the 1900s.

During his junior year of high school, Allen and his classmates participated in the voting rights movement.

Allen said he and his classmates taught people how to fill out applications to register to vote.

“We’re the youth that started the civil rights movement in Selma that led to the Edmund Pettus Bridge,” Allen said. “We grew up in a society where Jim Crow told segregation, and that’s all we knew.”

Coming of age in the 1960s, Allen channeled his inner Martin Luther King Jr. and vowed to be nonviolent.

“Even though we were living in a Jim Crow society, we never lost dignity, pride, or respect. Instead, it brought us together,” Allen said.

Since Allen’s retirement from the Selma Fire Department in 2009, he’s volunteered with the American Red Cross.

Allen is also a tour guide for the National Park Service in Selma and the fundraising chairman for the Salvation Army Advisory Board.

He has served 31 years as the PTO president at Sophia P. Kingston Elementary School.

“I’m so grateful that God has chosen me, and every task he put before me has been completed,” Allen said.