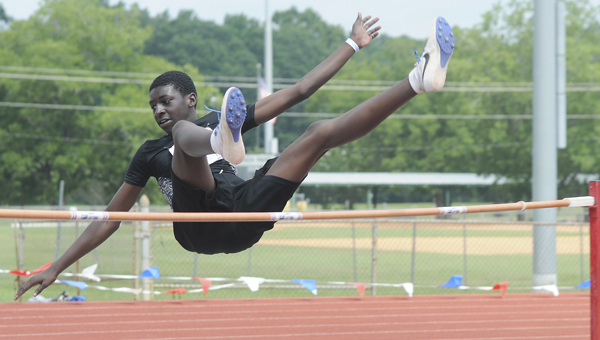 Memorial Stadium was busy all day Saturday as track clubs from around the state traveled to Selma to compete in the Junior Olympic Track and Field Championships.

Selma’s Walker Track Club was the one local club participating in a United States of America Track and Field Championships event that included teams from Gulf Shores, Huntsville, Mobile, Gadsden, Birmingham and Montgomery. The athletes ranged from ages 8-18.

This is the first time this event has come to Selma. Head coach of the Walker Track Club Jeffery Walker said his athletes enjoyed being able to compete in their hometown, something they have not had the opportunity to do often.

“We get a lot of exposure and the kids really enjoy it,” Walker said.

There were many Walker Track Club athletes who had successful days Saturday. Jaterious Levins won the shot put event in the 8-and-under category. Levins also placed second in the long jump.

Jaquavious Levins placed first in the javelin throw in the 15-and 16-year-old category.

In the 9-and-10-year-old triple jump, Josiah Walker came in first in the triple jump.

Glynel Humphrey Jr., an athlete with Alabama Heat in Birmingham who qualified for the boys’ 15-16 200 meter finals, said he is enjoying his first visit to Selma and Memorial Stadium.

Meet director and chairman of the USATF Alabama youth committee Dale Beard said he was glad that after two days of  bad weather, the skies finally cleared up for meet day.

“We love the city,” Beard said. “The weather has been wonderful.”