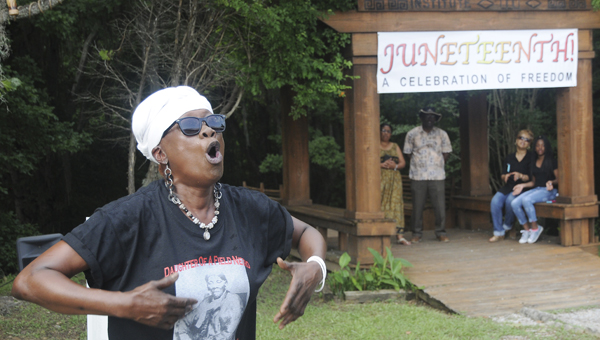 Abayomi Goodall speaks to a crowd during the annual Juneteenth program to Saturday at Civil Rights Memorial Park. — Justin Fedich

It has been more than 151 years since the last slaves were set free in Galveston, Texas. Each year, Selma makes an effort to remember Freedom Day, June 19, 1865, which remembers the day slavery ended.

Bridge. The program began with spiritual songs and speeches and ended with a walk on the Edmund Pettus Bridge to toss flowers in the ocean as a way to honor those who had to endure slavery.

When Mayor George Evans spoke to the crowd at Civil Rights Memorial Park, he emphasized the importance of remembering the history of slavery to understand the troubles ancestors had to endure to give people the opportunities they have today.

“No matter who you are, no matter how successful you are in life, the history is so important that we didn’t get where we are by accident,” Evans said.

Sen. Hank Sanders also spoke, as he emphasized that although slavery ended more than 150 years ago, the effects of slavery have not fully subsided.

“It was such a powerful thing that affects this country to this day,” Sanders said.

The program was filled with spiritual songs from the Rev. Michael Bowen, Rose Sanders and Abayomi Goodall. Those present were asked to call out names of ancestors and civil rights leaders who made a difference in fighting for equal rights.

One group that was visiting from California, the Sun Valley  Magnet School leadership class, stumbled upon the Juneteenth celebration Saturday. Steve Franklin said he was glad his students were able to see the program take place at Civil Rights Memorial Park.

“The kids realized that they have a lot in common with people who don’t look just like they do, and I think a big lesson from that is that we’re all the same,” Franklin said.

Franklin said that wasn’t the only lesson his kids learned.

“Get to know people,” Franklin said. “Learn what the civil rights leaders did and try to at least emulate the energy.”