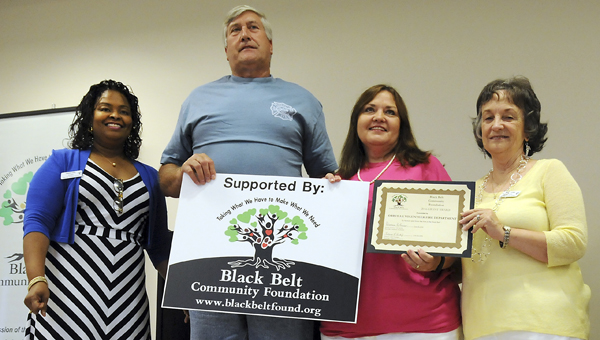 Orrville Volunteer Fire Department Chief Bill Grimes and his wife, Karen, accept a $1,800 grant from the Black Belt Community Foundation on Saturday, June 18, on behalf of the OVFD. They are pictured with BBCF president Felecia Lucky, left, and BBCF board of directors Martha Lockett, right. — Emily Enfinger

The BBCF partnered with the Alabama State Council on the Arts and the National Endowment for the Arts to hold its 10th Black Belts Arts Initiative Grants Ceremony at the Hank Sanders Technology Center at Wallace Community College Selma on Saturday.

“It’s a really great opportunity,” said Felicia Lucky, BBCF president. “The state agency realized there were 12 counties they weren’t able to fully reach but because the Black Belt Community Foundation is a community based group with a presence in each of those counties, they reached out to us to help them do it.”

This year, 21 organizations were awarded grants from Dallas, Perry, Wilcox, Marengo and other counties.

Woman-To-Woman of Greene County and Black Belt Treasures Cultural Arts Center in Wilcox County were each awarded $10,000 arts education grants, the largest amounts given this year. Karen Grimes, the wife of Orrville Volunteer Fire Department chief Bill Grimes, helps the fire department by applying for the grants and any other way that she can.

Karen said the fire department has been very fortunate to receive multiple grants over the years.

“The Black Belt Community Foundation has been very good to us,” Karen said. “There would be a big void without their funding to help us.”

The fire department plans to use the grant money toward funding art demonstrators and art activities for children for its 14th annual West Dallas Antique Tractor, Car, Gas Engines and Craft Show.

“Without this money, it would be hard for us to provide entertainment in the arts area for children,” Karen said.

The BBCF was established in 2004 to support efforts in strength, innovation and success of people and communities throughout the Black Belt region. Two years later, the BBCF made its partnerships to be able to invest more than $3.1 million to regional non-profits over the years.

“That’s all that we are about,” Lucky said. “[The grants] help us build a strong Black Belt today.  With out that, some of the communities wouldn’t have exposure to arts.”