A second suspect has been arrested and charged in Sunday’s murder. 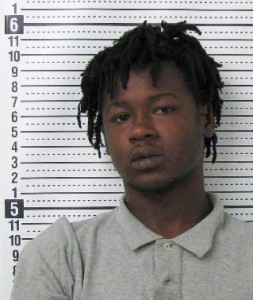 La’Darris Dees, 18, of Selma was arrested Wednesday in connection to the murder of Lowndesboro resident Jermaine Tarver, 27.

Dees was charged with capital murder, attempting to commit murder and discharging firearm into an unoccupied vehicle. As of Thursday evening, he had no bond and was in the Dallas County Jail.

Dees’ charges result from allegedly accompanying 23-year-old murder suspect Vardarius Hall to the scene of the crime and also shooting toward a second victim, an unnamed 31-year-old man.

Investigators speculate the two victims were outside playing cards when the suspects arrived. Dees remained in the vehicle with 21-year-old Kenyatta Shantae Wilson and 19-year-old Jalysa Shanjetti Turner, but Hall approached Tarver.

“He sat down and began asking the victim about his property,” said SPD Sgt. Evelyn Ghant.

After Hall and Tarver exchanged some words, Hall retrieved a firearm and began shooting at Tarver, according to authorities.

Investigators believe Dees began shooting at the second victim, from the vehicle, when the man went to check on Tarver.

Afterward, Dees was dropped off at another location before Wilson and Turner transported Hall out of Alabama.

Authorities speculate Hall was driven to Oklahoma following the shooting, and then to Florida.

The U.S. Marshals have been brought in to help find Hall.

“We are hoping that the second guy gets caught soon,” said District Attorney Michael Jackson. “He’ll [potentially] have some additional charges, but his most serious charge is murder.”

Tarver was transported to Vaughan Regional Medical Center by private vehicle with multiple gunshot wounds to the upper torso area. He was pronounced dead at the hospital’s emergency room. The second man was unharmed, Ghant said.

On Tuesday, Wilson and Turner were arrested and charged with first-degree hindering prosecution, a class B felony.

“It’s certainly a possibility that they will be given more charges given their activity that evening,” Jackson said.

The case remains under investigation.