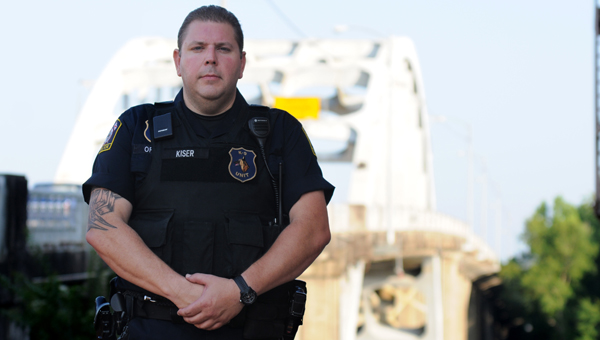 Selma Police Department officer Michael Kiser stopped a woman in her 40s from jumping off the Edmund Pettus Bridge on Thursday afternoon. The woman was taken to the Vaughan Regional Medical Center for treatment and observation.

A Selma Police patrol officer successfully prevented a Selma woman from jumping off the Edmund Pettus Bridge on Thursday afternoon.

Just after 2:30 p.m., a patrol officer rescued a woman in her late 40s from jumping off the bridge.

“We are very thankful he was in the right place at the right time because it could have been a totally different issue,” said Capt. Johnny King said. “We’re very proud of him.”

Officer Michael Kiser was responding to a call in Selmont when he observed a vehicle parked in the right hand lane near the crest of the bridge.

Kiser said he noticed a woman, dressed in only her underwear, looking over the railing of the bridge.

“When she started to cross the railing, I got out of the vehicle,” Kiser said. “By the time I got to her she had already gotten across the railing. She had stepped one foot off, she was getting ready to jump so I just grabbed her and pulled her back over the edge.” 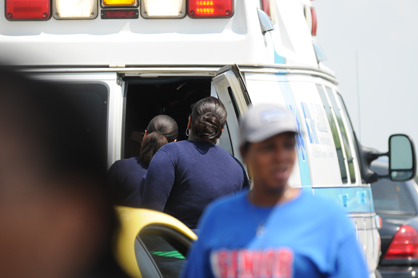 A woman who parked on the Edmund Pettus Bridge and walked to the ledge in her underwear Thursday afternoon was transported to Vaughan Regional Medical Center.

The woman was then transported to Vaughan Regional Medical Center by ambulance for treatment and observation.

“She is going through some personal issues,” King said.

Kiser has been serving as a law enforcement officer for the past three years in Selma. Although he has experienced a lot since joining the force, Kiser said he hasn’t ever encountered anything like this before. 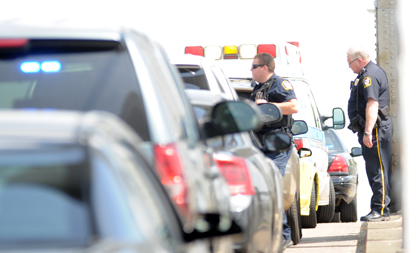 First responder vehicles line the side of the Edmund Pettus Bridge after preventing a woman from jumping off the bridge Thursday afternoon.

“I’ve been in a wrecked police car, been shot at [and] been in some hairy situations here but nothing like today,” Kiser said. “[I’m] just relieved she wasn’t successful cause I looked over the edge, and it looked pretty scary to me.”