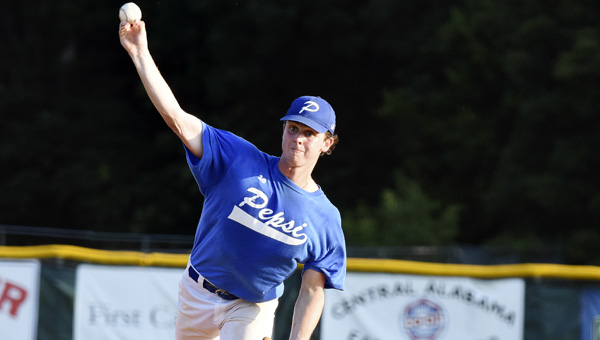 Pepsi’s Josh Criswell throws a pitch during Thursday’s 7-1 victory over Mountain Dew at Bloch Park. Criswell pitched all three innings and picked up the win for Pepsi. It was the fifth time Pepsi had defeated Mountain Dew this season. — Daniel Evans

Pepsi and Mountain Dew had already played several times this season going into Thursday’s games at Bloch Park, so the coaches from each side decided to change things up a little bit.

The teams agreed to play two separate one hour baseball games that acted as more of a scrimmage than a real contest.

The purpose was simple — give more players a chance to show what they could do ahead of the upcoming all-star selections — and to limit everyone’s time in the hot temperatures that affected the area Thursday.

“It’s more or less just recreation, something for the boys to do while they look forward to all-stars,” said Pepsi coach Jeremy Ross.

For the fifth time this season, Pepsi defeated Mountain Dew 7-1 in a Dixie Majors contest, but the game lasted only three innings due to the time limited enforced.

The teams were tied 1-1 after the first inning.  Pepsi’s Landon Davis scored on a passed ball and Mountain Dew’s Patrick Pettway had a RBI single.

“They were dragging and I told them it’s going to be kind of embarrassing if the newspaper shows up for the first night and you go out and let these boys beat y’all,” Ross said.

Ross’ speech must’ve worked because Pepsi dominated the rest of the game.

In the third inning, Pepsi broke the game wide open. Bishop Price hit a 2 RBI single to take a 3-1 lead.

Donnie Ross followed with a triple that hit the outfield fence to score Price. Singles by Phillip Peake and Benton Traylor each singled to tack on two more runs. The game’s final run was scored when Deandre Breedlove reached based on a poor and Charlie Dennis scored to make it 7-1.

“The kids need a sense of want-to,” said Mountain Dew coach Steven Washington. “They’ve got to come out here and do this, and not just be out here to be here. They can play, they just have to want to do it.”

The teams also played a second scrimmage game Thursday, just to get in a little more work.

No score was available for that contest as of Thursday’s deadline.The Dixie Majors play on Tuesday and Thursday’s at Bloch Park.