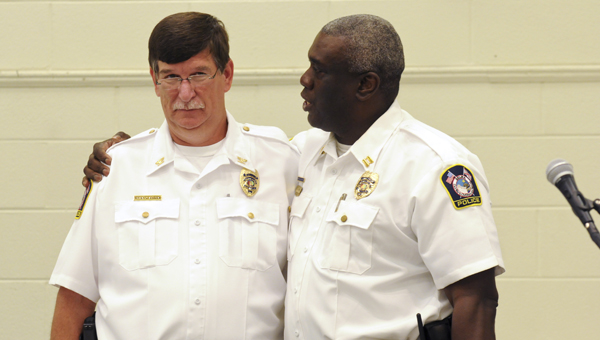 Six men of blue were promoted to ranks of sergeant and lieutenant on Tuesday with the addition of one captain, a rank that has been non-existent at the department for at least eight years.

The Selma Police Department held the ceremony during lunchtime at the Carl C. Morgan Convention Center.

“I’m proud for these officers,” said Chief John Brock. “They’ve got a lot of experience.”

But the promotion business isn’t over, according to Brock.

“We are just waiting on budgets and figuring out what we are going to do,” Brock said. “Right now we have 47 officers [and] 19 supervisors. I’ve got enough chiefs, now I need some Indians.”

With additional promotions underway, Brock said the department is expecting to hire about seven new officers by the end of the summer.

“It’s another way of trying to put all the pieces together in terms of our law enforcement, to promote men who have done a good job and deserve to move up,” said Mayor George Evans.

Brock said the room for promotions all started when he was promoted to chief. He said during that time, some people left or retired, leaving spots open for lieutenants.

In addition to that, when Brock became chief, he asked Evans for a captain to serve as the chief’s assistant, a position that has been non-existent in the department for nearly a decade.

“I’ve got a lot of responsibilities in my position,” Brock said. “I needed somebody underneath me that I could go to [and who could] take charge if I am not available.”

As captain, King will work over administration and internal affairs in addition to working as Brock’s second hand.

“I think it’s a great opportunity,” King said. “Through the years, God has blessed me to get to this point.”

For Brock, having King as his number two and being able to promote long-term officers is an added sentiment to their years serving together on the force.

“Our whole adult life has been at the Selma Police Department together. He’s got 29 years, I’ve got 30,” Brock said. “A lot of these other guys, I was there when they were hired.”