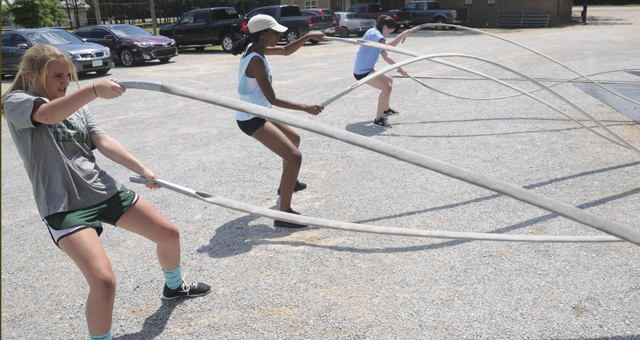 Most high school athletes in Dallas County are enjoying their summer off, maybe going out of town and giving their bodies some rest.

For the 28 Dallas County High School volleyball players, summer is when they’re working the hardest. Over the next six weeks, the Dallas County volleyball team will be working out at Selma Crossfit in an effort to gain a physical and mental edge over their competitors.

It’s the second summer head coach Linda Moore has given her players a chance to get in top shape for the season through Crossfit. But it’s not something Moore takes lightly.

In order to play volleyball in the fall, the volleyball players must make a commitment in June. The first workout of the offseason for Dallas County was Monday, and the team has workouts three days a week each Monday, Tuesday and Thursday.

Moore said the reason she makes the Crossfit workouts mandatory isn’t as much to force the girls to get in better shape as it is teaching the girls to work as a team before the season starts.

“We’re always ready after we do Crossfit because we feel like we’re close together as a team,” said senior Taylor Moore. “We’re mentally ready, physically ready.”

The workouts each day last just 30 minutes, but there is hardly any down time during the entirety of the half hour. The players are constantly rotating through various tasks, including battles ropes, barbell curls and triceps dips.

Coach Moore said certain Crossfit workouts translate very well to the game of volleyball, such as the wall jump, where the athletes have to jump up and touch a marked spot on the wall.

That particular workout helps attackers at the net, while many of the arm workouts help the athletes get a stronger serve once the season begins.

Selma Crossfit owner Reid McMilion said the leg workouts and the quick movements in the Crossfit workouts help the volleyball players in game situations, since the game situations often call for fast reactions.

While the Crossfit workouts are much more physically and mentally demanding than most other workouts, coach Moore said her players seem to enjoy them.

“For our whole team, it gets our energy built up. It readies us for the season,” said senior Alexis Goodwin.

However, there is one workout the volleyball players would avoid if they could.

“They like everything except doing burpees,” coach Moore said.

With many of the players returning from last season, coach Moore said she already notices an improvement from when her players began the Crossfit training last year.

Taylor said the team’s endurance has improved from the start of last summer as a result of the Crossfit workouts that don’t allow the players to rest until the 30 minutes are up.

“We get tired, but the people here help us keep our head in the game,” Taylor said. “They motivate us, so they support us and keep our stamina up. It just helps us keep going. If we have five matches to play, we’re not tired. It’s just five matches.”

Last season, Dallas County went 21-6 and won the class 5A, area 6 championship. McMilion said him and his team are going to push the players this summer to try to reach their goals of winning a state championship.

“When you get tired, you’ve got to keep fighting and pushing forward just like life. You move in the right direction. We really enjoy working with them, and we’re going to have them all summer,” McMilion said.