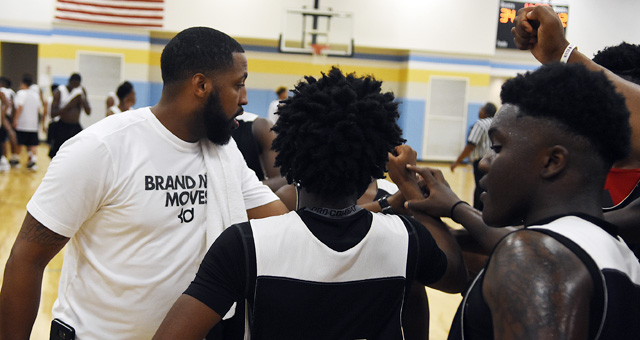 Southside head coach Cedric Brown breaks down a huddle with his team during the Selma High School Summer Slam Tournament earlier this year. The Panthers were one of many teams around the state that participated in UAB’s play date on Saturday. –File Photo

Both Southside and Keith lost six seniors to graduation, leaving each team with rosters lacking experience at the varsity level. By the time the calendar turns to basketball season, that’ll no longer be the case.

Both schools played in another basketball play date Saturday at the University of Alabama at Birmingham and participated in three more games apiece. It was Keith’s third play date and Southside has also been busy. Both the Panthers and Bears were one of 20 teams that participated in Selma High School’s Summer Slam Tournament in early June.

Southside head coach Cedric Brown said he’s seen improvement in a short time, but said the Panthers still have plenty of work to do.

“At this point, we aren’t in any condition to do what we want to do offensively as far as getting out in transition, running the lanes full speed like we usually do,” Brown said.

The one advantage of not running the floor is that the Panthers get a chance to work on their half court sets. Brown said Southside has put in several plays for half court situations already and said the Panthers have improved in that area.

Instead of running a play the way it was drawn up, the Panthers are starting to take advantage of what the defense is giving them.

“That light is starting to come on, and they are starting to ad lib a little bit instead of just running the play,” Brown said.

At UAB, the Panthers won a game against reserves from 7A Spain Park and lost contests to 4A runner-up Cordova and 6A playoff qualifier Paul Bryant.

All he knows is it’s going to be a busy week for the Bears.

“I’ve said to my guys all summer that it’s not about winning or losing these games. It’s about getting better and I did see flashes of improvement from game to game,” Tisdale said.

This week will be one of Keith’s busiest of the entire summer. On Monday, Keith played in Midfield against Hoover, Minor and Sumter County. On Wednesday, Keith travels to another play date in Montgomery. On Friday, Keith hosts a play date that will include Southside and Demopolis.

The following Friday, June 24, Keith will participate in a play date at the University of Alabama.

“As many as we can get in,” Tisdale said of all the play date’s his team is playing in this summer.

The Bears are still learning how to play together, but Tisdale said starting over with a new roster isn’t something foreign to him. After all, this isn’t the first time he’s had to reshape a roster after a lot of players graduated.

“We’ll do it by committee. Every year is a different year. We get new players every year,” Tisdale said.

Brown is also looking for leaders to step up, but he thinks he might’ve found one in Keshawn Arrington, who had an impressive weekend at UAB.

“He shot the ball really well and stepped up and led us offensively,” Brown said. “He also led us defensively on the court and

Southside is expected to join Keith in Orrville Friday for the Bears’ play date. The play date at Keith Friday starts at 10 a.m.