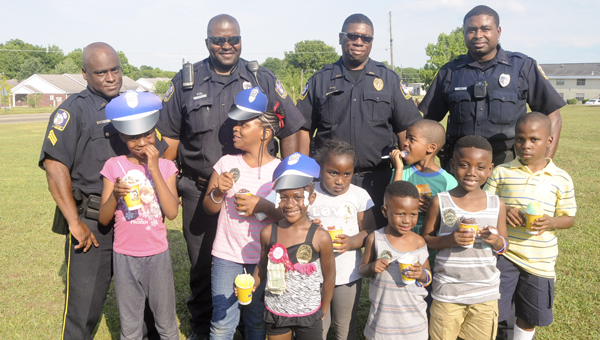 Selma Police Department officers have taken initiative to form a better relationship with the community.

During summer months, they will go out to different neighborhoods in the city and encourage people to do their part in reducing crime and making Selma a safer place.

George Washington Carver Homes was the first stop last week and Chanticlear Apartments was the most recent Friday.

Lt. Natasha Fowlkes said officers will visit every ward in Selma at least three times before the summer ends.

“We can’t be everywhere at all times. There are more eyes and ears in the community than there is in the police department. So, we rely on them to give us information and help us solve crime,” Fowlkes said.

She said the less trust there is between the community and the police department, the lower the chances are to get help from citizens.

Officer Nathan Gibson agrees with Fowlkes and said through the initiative, he hopes people would let their guard down and start to trust police officers more.

“We are doing this to help the community. A lot of people are afraid to talk to the police. This gives them the opportunity to come out and talk to us,” Neely said. “Hopefully, people see we are approachable and we are tying to prevent crimes from occurring.”

The Selma Police Department is partnering with Glenn McPhillips of Kono Ice to give children in each neighborhood free icees as well as information on how to reach the police if they are ever in trouble.

“I think this gives kids a positive image of the local police department. I just like helping out in any way I can,” McPhillips said.

Children also got stickers, pencils, wristbands along with mock badges and hats.

Before the SPD started the community policing detail, Chanticlear resident Asia Molette said she believes many people had a tainted view of the police.

“I think this is good because most people don’t trust the police and believe they are corrupt. It’s a great thing that they are trying to change that perception,” Molette said.

She believes it is important for the Selma Police Department and residents of the city to have a good relationship, which she said would benefit the city as a whole.