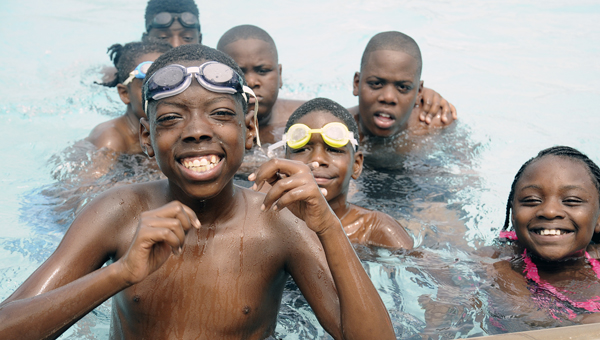 The Dinkins Pool opened Monday, and children are already taking advantage of the opportunity to cool off and have some fun.

On Thursday afternoon, children filled the Dinkins Pool, splashing and swimming around as parents and lifeguards looked on. John Solomon, who has been a lifeguard for the pool for the past 15 years, said it’s great for Selma to have a place where children can be active and have another activity around town during the summer while school is out.

“It’s very important, especially in the community, kids have somewhere to go since they’re out of school they can come here and swim for a few hours, enjoy the water,” Solomon said.

The pool is open from 9-11 a.m. in the mornings and 1-6 p.m. on the afternoons Monday-Friday. Registration was held this past week for swimming lessons at the Dinkins Pool. The lessons will take place June 14-July 28 on Tuesdays and Thursdays, The pool will be closed to the public during those mornings for lessons.

Solomon said he has watched many children at the pool grow up, and the kids who have taken swimming lessons have benefitted from it.

The public admission to get in the pool is $1.

Foster Davis has been working at the Dinkins Pool since 1976, a year after the pool first opened. The pool was closed in 2013 and 2014 due to poor conditions, but a donation from Edmundite Missions helped the pool reopen in 2015. Davis said it is good for the community that the pool was able to be reopened last summer.

“It takes them off the streets and gives them something to do,” Davis said.